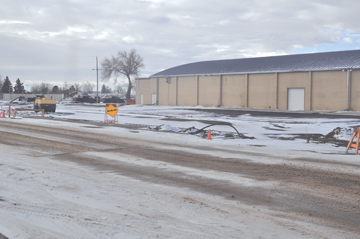 Commentator/Courier Photo by Justin Seward The Redcliff Rec-Tangle Arena's parking lot upgrade will be on hold until next spring. Drivers will be able to use the parking lot in the meantime as it will be opened up in the near future.

The Rec-Tangle Arena’s parking lot in Redcliff will have to wait at least until next spring to see the asphalt work be completed.
The decision was made on Nov. 8 due to some ground issues.
“We’re not going to move forward with asphalting of the parking lot this year due to the softness and water pockets that are in there because we’ll have to end up digging it up again next year and make too many repairs,” said Darrin Thibault, the town’s director of community and protective services.
“I don’t know what date, but we’re going to open up the parking lot so that folks can use it over the winter and we’ll have to revisit the paving next season.”
Thibault says the parking lot will not have asphalt on top and is usable.
The project also included digging up the base that was passed its life expectancy as well as drainage issues which resulted in replacing multiple lines and inserting multiple touch basins.
“It’s not what we were aiming for,” said Thibault of the delay.
“I don’t know what all the circumstances were to arrive here. But we just know it doesn’t make any sense to try and force asphalt in this type of weather.”
There will be an assessment after the winter season as there is the possibility of more resurfacing, he added.
“What we would like to do is get it open to the public because for people having to park across the street like that, it’s beside themselves. I can’t believe it took all summer and it’s not done,” said Redcliff Mayor Dwight Kilpatrick.
“Patience is not a virtue anymore, it’s an anomaly. That job went west a week after they started it and it never got caught up again.”
In the coming weeks, the contractor will be pouring concrete for curbing and accessibility.
The arena upgrade project is one of three projects that will roll over until next spring along with Broadfoot Place where MJB did some storm work underground and Transit Paving was going to come in and repave the area and the hole at Third Street and Third Avenue.