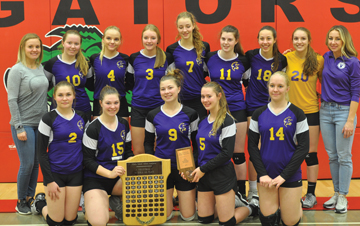 The Foremost School Forettes' took home the fourth place plaque at the 1A Provincial Championships in Bow Island on Saturday.

The Foremost School Forettes senior girls volleyball team left it all out on the court during the bronze medal match Saturday.
The Forettes battled the CACHS Knights, but ultimately fell short of the podium after losing in a hard fought three-set (25-20, 23-25,9-15) match at the 1A Provincial Championships in Bow Island.
“Our goal was to be at provincials and we knew it was going to be some good games and were just happy to get where we’re at,” said Mandy Hougen, head coach.
“We finished strong and didn’t give up. It was a good ending even though it wasn’t an ending that we were necessarily hoping for.”
Each team had to play four round robin games and in Foremost’s case an additional three games were added on the Saturday because they made it to the playoff round.
“It’s a lot but the girls are used to it from other tournaments from the year,” said Hougen.
“We didn’t have a lot of pressure. Even though we’re here, we’re still having fun and there’s still some nerves.”
Hougen says the Foremost squad was happy to be competing so close to home alongside the Senator Gershaw teams.
“We were so happy they were so supportive,” she said.
“The parents, the staff and the whole school put on a great provincials. It was nice to have a short drive here and be a part of it. A big thank you to them for hosting. They did a great job.”
With the fourth place finish,  the team made history by having their best finish at a provincial tournament.
“It just feels really good that our team was able to do that and we actually came together and were able to get to the fourth place game, said Morgan Brower, who is one of seven Grade 12s on the team.
“It just means a lot of to us (as) a whole team.”
Kamryn Yancie is another Grade 12 on the roster this year and says the team did not have high expectations coming into the year end finale but came together and got to the bronze game.
“We have seven Grade 12s this year, so we were expecting to have a good year,” said Yancie.
“We were strong from the beginning and stuck (it out) until the end.”