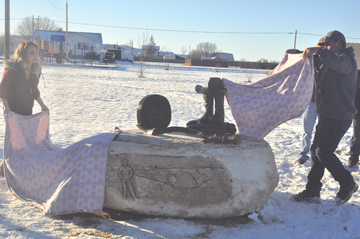 Several people gathered at the Walsh Fire Station on Thursday afternoon for the unveiling of a memorial statue for well known local area rancher and firefighter James Hargrave.
Hargrave died in the line of duty fighting the Hilda fire back in October 2017 in a car accident.
The statue was designed by Chainsaw Spirit’s Marina Cole and had the hat and boots he wore as well as a fire hose on that was bronzed on top of a rock.
Cole, who grew up with Hargrave through school, says while it was really nice to have the honour of designing the statue, at times it was stressful.
“It was really hard,” said Cole of designing the statue and thinking of Hargrave.
“I had to try and put it to the back of mind, but it was really hard to do that. It was probably one of the hardest pieces, even though it was his boots, his hat and all that. It wasn’t necessarily him. It was very hard to do and I struggled with it a lot.
“It’s for everyone. It’s for him.”
Cypress County peace officer Anna Mast was the county’s organizer for the statue and was on the fire services when the Hilda fire occurred.
“After things settled down four or five months after the passing of James, we sat down as a management team, the fire services team and just thought ‘OK now let’s move on to how can we memorialize James in a sacrifice,’” said Mast.
“We just started the ball rolling on having conversations on who we can ask and Facebook is a great thing. We had heard of Marina Cole and we reached out to her. She kind of took the bull by the horns because she knew him personally and was honoured to be chosen.”
Mast says the last couple of days leading up to the ceremony were emotional for the few that were working on the project.
“We need this closure and something to look at so we can move forward and try to remember James in a happy light.”
Walsh fire chief Jack Zieffle said, “It was nice to see him remembered. He definitely left a mark on his community … He was always helping everybody. It’s nice to see something there that he’ll be remembered by.”