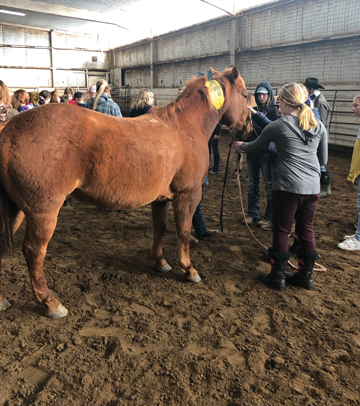 The Linda Kraft-led inaugural Equine Interaction Program with her Irvine School Grade 7-9 students is set to wrap up on Jan. 21.
Kraft also teaches a regular Equine Program at the school and the difference is in the Equine Interaction there is no horse back riding involved.
Kraft says the focus for the students is to interact with horses and sometimes drawing parallels into their own lives with the horses.
“My passion is in regards to equine interaction and that’s what I enjoy the most, especially with kids,” she said.
“You just see so much growth and not that you don’t when you’re riding, it’s just such a different kind of growth and realization and confidence (with) kids that would not normally be able to have interaction with horses.”
Kraft says initially the school was going to cancel the six week CTF (career and technology foundation) course due to the weather for the riding portion and the kids had the option of doing other CTFs.
“I put in a proposal and got it approved with funding through our board office for it, “said Kraft of getting the interaction program to go through.
“I’d like have to have the program go all year round but it was just a pilot-type project. Hopefully we get into doing more of that next year as well.
There are 25 participants in the program that started on Dec. 3, 2019, which was up from the 15 student minimum that needed to make the sessions possible and more kids were interested than the room that was available.
“It’s been awesome,” she said.
“The kids really look forward to it. I wasn’t going to have my equine students attend because to them some of the activities would be to halter a horse. For new kids, it was a team building, a problem solving and it took the new kids probably 30 minutes at least to get this done. Whereas if it was my equine students, if they were to do that activity, it’s something they do everyday.”
Kraft says her equine students act as facilitators and it’s a great opportunity for those leasing horses to a have different kind of interaction with their horse.
“I can already tell with some of the moods and behaviors of the students that its been such a positive experience for them, said Kraft.
“My hope is that they can draw upon some of their memories and things they did in regards to this and to help them in their future.”