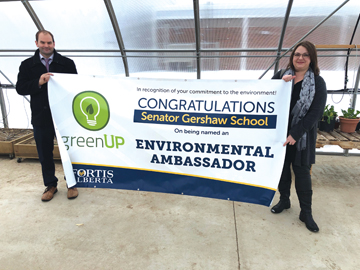 Senator Gershaw School has had a greenhouse for over a year and wanted to expand their knowledge by adding a composting initiative to the fold for the facility.
Fortis Alberta recognized the school as an Environmental Ambassador last week with their commitment to the environment and was the recipient of a $1,000 green UP grant to help with composting material for the school.
“We have the greenhouse and it’s like OK how can we enrich the soil and also how can we reduce the amount of garbage we’re sending out,” said Scott Angle, school principal.
“It’s pretty obvious landfills are getting full. Our hope is that we can educate our students on how to reduce some of that waste.”
There is compost bins inside the greenhouse and the students will take the school’s waste and enrich the soil in the greenhouse, he added.
Angle says the initiative will run across both Senator Gershaw and Bow Island Elementary Schools.
“If they learn how to reduce waste early on then they can continue on all the way through their schooling,” said Angle.
“Everyone is going to be using it. We’re not there yet but this will help purchase some of those items that were needed to get that going farther than where it is now.”The idea came about last year because the school’s science curriculum includes a focus on waste.
“We do have programs that have food required, that there’s some food that probably could be composted,” said Angle.
“It came more about from an education standpoint and a good portion of the science curriculum is reducing waste and recycling, reducing and reusing. This helps to put a real world spin on what we learn in textbooks.”
Angle says with the grant there will be discussions of where the best use of the money goes and how to get the students involved and the community.
“It’s a work in progress right now,” he said.
“I wouldn’t say we have definite plan of this is how we’re going to do it across community.”