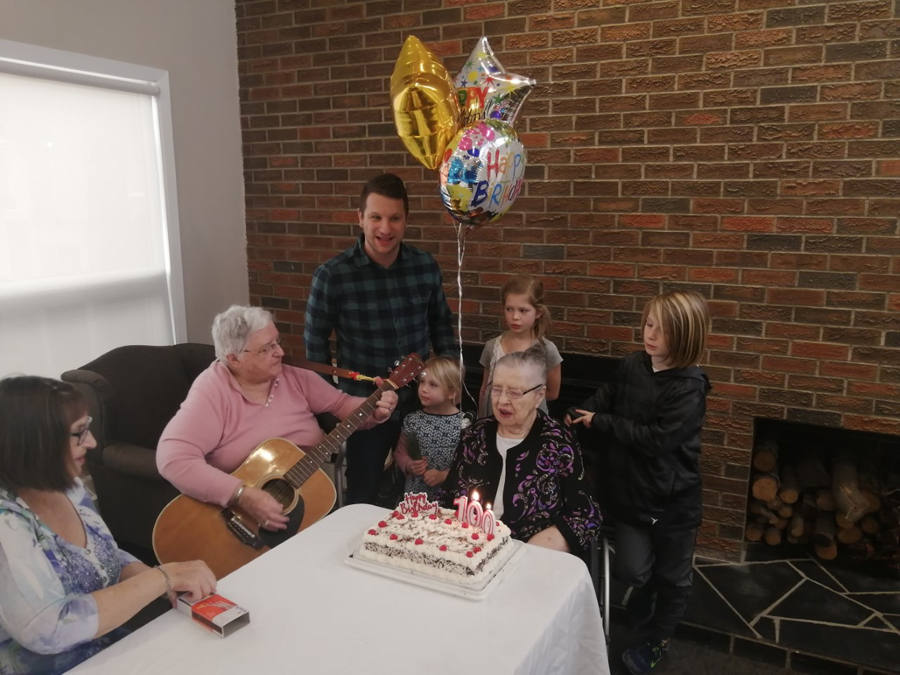 On Jan. 31 in Coaldale, Sunny South Lodge resident Jania Krenzke received the royal treatment, as the Queen, the Prime Minister of Canada and provincial and local dignitaries sent happy birthday messages to the 100-year-old. Family and friends gathered to wish Jania the best, ate cake and played bingo.

Jania’s daughter Heidi said her family was one of the first farmers to be granted “Farmer of the Year” in the Bow Island area, way back when.

“She came from Ponderay, so Foremost. She came to Canada in 1950. She married my father and they were actually the first ranch in the Ponderay area. When other people came, they would always open their house – while the other people built their houses,” Heidi explained. “She farmed out there for years and years. Dad died when I was 11, so she had to take care of everything until she left the farm to live in Lethbridge. Then she moved into a lodge and now she’s in Sunny South. She’s in a wheelchair, but she’s with it. She does pretty good,” Heidi joked, adding she also has a brother – who still lives at the farm.

Heidi noted her mom was quite involved in the area’s Ladies Aid and she always had a huge garden. “Nobody ever left the place without flowers or food. She always worked outside. When dad died, she had to take over the farm with my brother, so she kind of lost touch with doing anything because she was too busy.”

According to Heidi, Jania couldn’t believe she was turning 100 years old. “It took her a long time to believe that. It’s amazing how she came from Poland, where she went through the war and came to Canada and got married. She didn’t even speak English when she came. My grandma spoke German and my dad didn’t speak German. My grandma translated and they got married soon after she got here.”

Jania, Heidi continued, is very generous and caring. “People would come and she would always show them her flowers and always give people flowers to take home or garden stuff.”

“It’s amazing how she went through all that trauma of war, coming to Canada and everything, losing her husband and taking care of everything. She’s very strong,” Heidi said.

Alex Radvanszky is Jania’s son-in-law and was a guest at the birthday girl’s celebration.

“She’s been a great person and a great mother-in-law. I don’t know why people say you can’t get along with your mother-in-law. It’s been a pleasure being her son-in-law all of these years,” Alex said.

According to Jania, the secret to celebrating 100 years is eating the right food, working hard and plenty of exercise – as told to family, when asked how she got to be a century-old.

Jeremia Radvanszky, Jania’s grandson visiting from Langley, B.C., said what a thing it is to celebrate his grandmother’s 100th birthday. “For my grandma, my mom was sick, so I lived with her a lot of my life growing up as a little child and into my university years. So in a sense, to have this super close family member be a hundred, is something to celebrate.”

“We are very thankful the care she has had and the impact she has had on our entire family. It’s nice to see her be 100,” Jeremia said, adding his grandmother is also healthy, which is great news.

A milestone of 100 – it’s something that is super rare, Jeremia noted. “For me to be able to see someone and have a family member, I’m just proud of what that means and also she is able to be healthy enough, it’s not something difficult for her. Our kids are excited to have her be 100. The youngest one said she wants to live forever. My oldest, understanding 100 is good if she’s healthy. For us, we’re thankful she is well enough to understand what is going on and enjoy this 100th birthday,” Jeremia said.