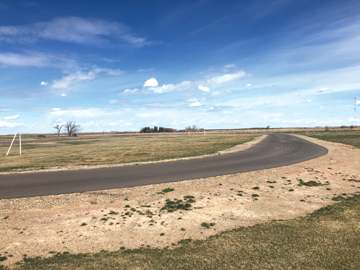 The Bow Island running track modernization project is nearly complete and the track’s committee chair hopes the final few touches will be done sooner rather than later.
“There’s a little bit of cleaning up of the actual track surface itself, just getting rid of any low spots, any cracks,” said Scott Angle, running track committee chair.
“They’re probably coming to do that (this week) and the landscaping work both on the inside and outside of the track is going to be completed in combination between Dendron Services and Vanderhaar Construction.”
Although he does not have a timeline, he hopes the lines are painted on “sooner than later” and landscaping be done in the coming weeks.
“Ideally I hope the whole track project wraps up at the very latest end of June,” said Angle.
“But the sooner the better realistically. That’s kind of the goal. Weather and things affect it and availability of people working.”
Angle said the track is getting used a ton right now because there’s not a lot for people to do right now.
When Angle looked at financing, the project is looking for more funds to finish up some of the work left remaining.
Richardson Pioneer made a $21,000 donation a couple of months ago, which Angle says helped cover the cost of the lines.
“We’re still probably short a little bit because we can still do some more things,” he said.
He estimates another $10,000 to $20,000 would clean everything up.
The committee has not met yet regarding on how to proceed forward with asking for donations, he confirmed.
“We’ve applied for grants. But the reality in this climate is those are going to be less successful. Everyone is a little short on finances right now,” he said.
“Realistically it’s not a good time to go ask for donations or seek out companies as every company is feeling the pinch of what is going on right now.”
Other addition in the future will be a storage locker for equipment and picnic tables.
“I feel the community has done a great job in coming together on this,” said Angle.
“I would say a government grant would finish it off. But I’m not sure we’re in a state right now where government grants are coming.”