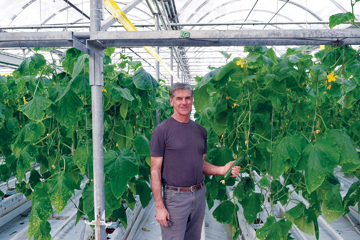 Commentator/Courier File Photo VEGGIE GROWING DOING WELL: Albert Cramer thinks the greenhouses have done well through the COVID-19 pandemic. The challenge came at the beginning with demand in stores.

he COVID-19 pandemic has not had a whole lot of impact on greenhouses, says Albert Cramer, owner of Rolling Acres Greenhouses and part owner of Big Marble Farms.
“It did for a bit in the beginning because what happen was the stores overbought product and then we (were) backed up with product pretty good,” he said.
“Once everybody got back to a regular shopping habits, then it kind of opened up again. Right now its moving fairly smoothly.”
Cramer says most of the labour force was already here when the lockdown happened and was not a big issue for them because greenhouses start early in the year.
However, protocols had to be put in place so COVID-19 would not spread in the work force.
“We both did our protocols to try to make them (workers) aware of where they go in the city (and) be careful,” said Cramer.
“They’re Thailand people. Asians are pretty good that way, they wear masks pretty quick any way … Of course I have two groups in my greenhouse. They’re foreign workers so they live in the same house. Those groups stay together. They didn’t go much in the greenhouse. The greenhouse is pretty big in side. So we can keep them kind of separate just from the public.”
Rolling Acres Greenhouse monitored the temperature of its workers in effort to try and catch somebody with the flu.
“They didn’t have any issues. But we set an apartment aside that if we did have anybody that was sick, we would be able to right away quarantine them.”
“That was more on my side. I think the rest of the greenhouses (were) all similar. You take on a protocol, paper work and all that, something like food safety, and you make sure you’re doing it everyday and one greenhouse will be better at it than the other.”
Red Hat Co-operative and Big Marble Farms took similar measures.
Cramer said as far as providing the food banks with product that “We gave them as much as they could handle.”
“They had to turn us away at the end. We had a lot extra product on the floors and you can only hold vegetables so long. We actually faired fairly well with the whole thing.”