Flight Academy students back up in the air 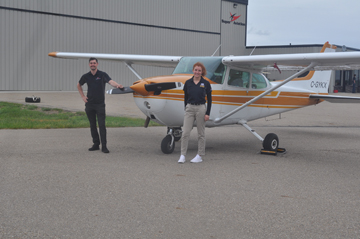 Dave Rozdeba Flight Academy students were able to take off for training flights on June 8 at the Medicine Hat Regional Airport.
It was due in large part to Super T Aviation reopening with some normalcy on June 1 that the opportunity was presented for the students to book their flights right away.
Lindsay O’Connell was one of the four pilot students to go up for the first time and there was a feeling of sheer excitement.
“It was exciting,” she said.
“We were supposed to be flying months ago and then all this (COVID-19 pandemic) happened. It’s just great to be able to go up again.”
Despite the overcast and windy conditions, the day turned out to be OK for flying.
“It was actually a really nice day to fly,” said the Grade 11 Eagle Butte student.
“It was really smooth. (I) got to see some stuff around town.”
The students have been doing ground school-the theory behind how airplanes fly-since school began and the pilots were prepared for their flying training day.
“We’ve been studying a lot for this and I mean we’re all prepared,” she said.
She is hoping to try more complex maneuvers in her next flight.
Shelby Reiling, Montana Van Maarion and Kayle Routly were the other students that joined O’Connell in the air that day
Logan Neubauer came and watched his fellow classmates fly as he had to wait until Wednesday to go up.
Neubauer’s love for aviation at a young age is what peaked his interest in the first-year academy.
“When first I saw the movie Top Gun for the first time and the flying scenes. That kind of grabbed me,” he said.
“Then when I went to my first air show shortly after, that kind of lit a fire. Ever since then I’ve always just loved airplanes and just couldn’t wait until I could start flying.”
He said “it was just like a dream come true” when the flight academy began at Eagle Butte High School.
“I’m really looking forward to getting up into my actual proper first training flight and start to log hours towards my license,” he said.
“I’m just so thrilled we have this opportunity to come out right now. It’s been a pretty slow three months and to be able to come out and learn how to fly airplanes with your friends is just unbelievable.”
On top of ground schoolwork via Google Meet, students have been learning about various things such as survival exercises, first aid training and WHIMIS endorsements just to prepare the students for being a pilot.
Jimi Ricci is the Flight Academy’s lead teacher for Eagle Butte High School and feels the enthusiasm for this day to come for the kids.
“These kids have been working hard and have been looking forward to getting up in the air,” said Ricci.
“They’ve had a few let downs. Whether it was day light in the fall or COVID-19 in the spring. Some of them were just on the edge of getting up in the air and they had to cancel.”
The students were also to contribute to building a Van’s RV-12 aircraft and that project has been put on hold.
Ricci said “they were done with the hypotheticals and they wanted to get in the airplane and so some flying.”
“They’re coming out of the plane, they’re grinning, smiling” he said.
The Dave Rozdeba Flight Academy is a three-year course for Eagle Butte High School students, beginning in Grade 10. Students earn credits in robotics, mechanics, wilderness, tourism, leadership and recreation, while obtaining a private pilot’s license.