‘Assessment proposals are not the answer’: Hamilton 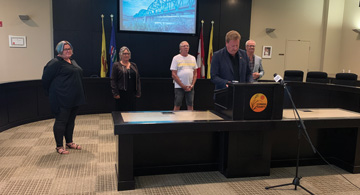 Commentator/Courier
It was first reported by Cypress County on July 31 that the municipality could face dire circumstances if the province were to change how linear assessments are done.
“Initially (it) was fear,” said Reeve Dan Hamilton, of when news broke of the possible assessment changes.
“’We’re not going to be here in a couple years,’ was the initial reaction.”
For many rural municipalities, including Cypress County, linear assessments make up a significant portion of property tax revenue from oil and gas companies.
Cypress County will take a significant hit because the municipality owns 30 per cent of the gas wells in question.
“We understand the province’s intent is to ease the burden on the oil and gas companies as key parts of the Alberta economy,” said Hamilton, in a part of his address to media on Aug. 4.
“But assessment proposals are not the answer.”
All four models look at base cost, depreciation, land assessment, statutory levels and other adjustments.
According to the RMA (Rural Municipalities of Alberta) report, The reduction in property tax in scenario A is six per cent and goes to down to 20 per cent in the worst case scenario.
As a result, the county could lose $7.8 million in revenue in the first year alone.
“It gets worse in subsequent years,” said Hamilton.
That is between 16 and 22 percent in lost revenue, depending on the scenario.
The municipality could see an increase of residential taxes of between 132 and 181 per cent, an increase of non-residential tax from 40 and 64 per cent and a farmland tax increase of 1,550 per cent.
“If you’re a homeowner, and you currently pay $2,000 a year for property tax, imagine next year’s bill is now up to $3,620. For a farmer paying $10,000, his tax bill will be $155,000,” said Hamilton.
The county will be forced to make cuts to services and increase user fees.
Those areas will include to aged municipal infrastructure, decreased road maintenance, increased cost on municipal utilities and services, reduced bylaw enforcement, reduction or cancellation of dust control program and significant road bans to be put in place to save infrastructure.
“Cypress County runs a very lean operation as it is,” said Hamilton.
“Our staff has looked at cuts wherever they can do it and still maintain the same service we carry today. If this goes through, we’ll have to seriously look at taking away services and try to stay above port. We’re going from a $22 million a year budget, (and) if this goes through, we’ll be down to a $14 million a year budget.”
Electric powers systems, street lighting, telecommunications, railway property and pipelines are included under linear assessments in the Municipal Government Act,
“We have, for years, assessed these assets, based on their replacement value,” said Hamilton.
“The province’s proposals would change this market value, and in each of the four scenarios under consideration by the provinces, rural municipalities lose.”
With a scenario decision to come in four weeks, Hamilton feels there is time to make change.
“Fortunately, there is time for us to discuss this, and that’s what we’re asking-to have a seat at the table and make our concerns known,” he said.
“I want to be clear. This is not about counties versus oil and gas. We support the oil and gas industry and understand how important it is to the economy. But so are rural municipalities. We provide the services and infrastructure that make it possible for residents, agriculture and industry to exist in this area.”
Hamilton’s hope for meeting with the government is to find a different solution.
“We only have one tax revenue and we have a little bit of user fees. That’s our only ways of producing money to take care of the county,” he said.
“The government has several other alternatives they can use. We respectfully look into some of those instead.”
It is encouraged for county residents to contact local MLAs Drew Barnes and Michaela Glasgo with their concerns.
The review is ongoing and there has been no final decision made.