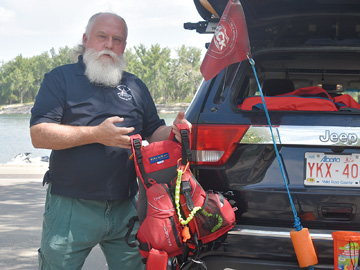 NEWS PHOTO MO CRANKER Paddling Club president Rick Redmond holds up a safety vest at Strathcona Island Park on Aug. 3. He says safety on the water is important all year round.

Following the drowning death of a 31-year-old man on the August long weekend, the president of the Medicine Hat Paddling Club is urging river safety for all recreational users.

Rick Redmond says water levels are safe for paddlers to take trips down the South Saskatchewan River but people need to take the right precautions before making each trip.

“A month or so ago we saw river flow rates above 1,000 metres cubed per second,” he said. “Right now we’re sitting just under 200 per second, which is safe for most paddlers if they’re wearing the right safety gear.

“People must have their life jackets on and done up safely. They also need all of the necessary safety gear on their boat or raft.”

Redmond says water levels will continue to go down, which can pose other challenges.

“Low flow rates bring different dangers,” he said. “There’s gravel bars throughout the city and people can get caught in them. If they do, their boat can flip and everyone will fall out.

On top of a life jacket, people need a bailing device, signalling device, whistle, flash light, a hat and sunscreen.

“A hat and sunscreen are often forgotten when people are out on the water,” said Redmond. “Heat stroke is a real possibility when you’re out in the sun for that long with no shade.

“Having a life jacket is no good if it’s not on.”

Redmond says people need to be smarter about staying sober on the water.

“Drinking while out on the water is common and very dangerous,” he said. “I can’t state enough how dangerous this is, especially in this heat and on this river.”

Information on river flow rates can be found online at https://rivers.alberta.ca/