Young rancher wise beyond his years; has 2,000 reasons to smile 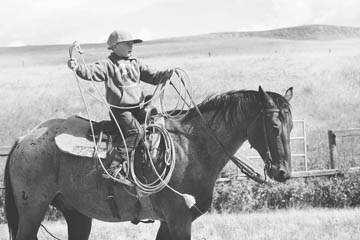 Photo by Jody-Rae Pittman PERFECTING HIS SKILLS: Hayes Howe has a lot of skills and quite used to working cows.

Empress’ Hayes Howe has a lot of reasons to smile these days. Sure it has been cold, but he is enjoying life on his mom’s Two Rivers’ black Angus ranch near Empress. Hayes rides horses, works cows with his mom and has done pretty well with showing livestock.
Recently through the Canadian Angus Association’s Canadian Angus Foundation, the impressive youngster earned one of only three $2,000 vouchers given nationally in order to purchase a heifer cow. These vouchers are given to Junior members of the Canadian Junior Angus Association. It’s a big deal for someone who just turned 9. Sounds young, but he’s accomplished and learned so much already.
“On an excitement scale of 1-10 I would say an eight,” explains Hayes. “I am excited because it is a great opportunity to increase my herd. I’m excited that I get to go shopping for a registered Angus heifer.
“I am also kind of excited because I want to show this heifer next year and its calves in years to come. I want to buy a heifer from a top notch Angus breeder because I want it to look good, have decent EPD’s and and excellent pedigree. I hope to buy it privately by looking online and talking to breeders. One place I am considering getting it from is Poplar Meadows Angus in B.C. because she has had some pretty good calves (but I will) see what else I can find online.”
Hayes points out the $2,000 probably will not cover the entire cost so he might have to put in an extra few hundred dollars to make it work. It has to be used before the end of the year. Hayes heard about this contest from the Canadian Angus Foundation CEO Belinda Wagner. She later called to let him know that he had won the voucher in a draw of all active Canadian Junior Angus members who had purchased their memberships before October 1. He tries to enter all contests as much as possible. He has been to the Canadian Junior Angus Association Show called CJAA Showdown and was planning to go to it again this summer with a heifer but it was cancelled because of Covid. He usually enters all of the competitions at Showdown like the Art, Photography, Judging, Showmanship and Heifer Confirmation.
In the meantime, he helps his mom Mona and her operates an Angus-based ranch. He says Angus are a great breed. He would know as he has a lot of chores and makes a big contribution to the family operation. He feeds and waters his animals every day. He also checks cows to make sure they are in the right field and make sure they are healthy. Hayes also has to “pick bulls to breed the cows to make sure they will have a good calf.”
Hayes is already learning what it takes to be in the industry.
“I like Black Angus the best because Angus cows are good mothers and because they are a popular breed that is highly marketable,” the nine year-old says. “Angus are different from other breeds because the beef consistently marbles well making it more tender and juicy, they are also know to be very versatile and do well in many environments. They cross the best with other breeds for ranchers… Also, my Mom owns Mo Angus and raises really good quality Black Angus cows and bulls. She sells 2 year old bulls to other ranchers and I want to do that too.”
“For a good registered heifer, it costs more because they are registered and you can produce show heifers and bulls to sell off them,” he notes.
Hayes is very organized and knowledgable already but that isn’t by fluke. He worked hard. He has been working cows with his Mom “for about 6 or 7 years.” Growing up on the ranch, you get accustomed to working early. He went to his first Junior Angus Showdown show when he was 5 years old and started riding horses when he was 2 years old and was riding by himself by 3 on a pony named Cactus. He says he moved to riding a big horse when he was 4 years old.
Currently, he is a member of the Irvine 4-H Beef Club.
“This is my first year as a real member, but I was a Cleaver member for the past three years. I show calves and sheep in 4-H. This year I will have a market steer, market lamb and now a heifer to show.”
Hayes enjoys all the farm animals including horses and pigs, besides the sheep and cattle. There’s nothing he enjoys more than ranching.
“The best parts about ranching are riding and chasing cows and you get to spend lots of time with your animals,” he explains. “I think it is important to produce meat for people to buy and it is a good way to make money.
“I like that I get to show cattle because I learn the parts of the animal, how to groom better and I get to be a better judge of livestock so someday I might become a professional cattle judge.”