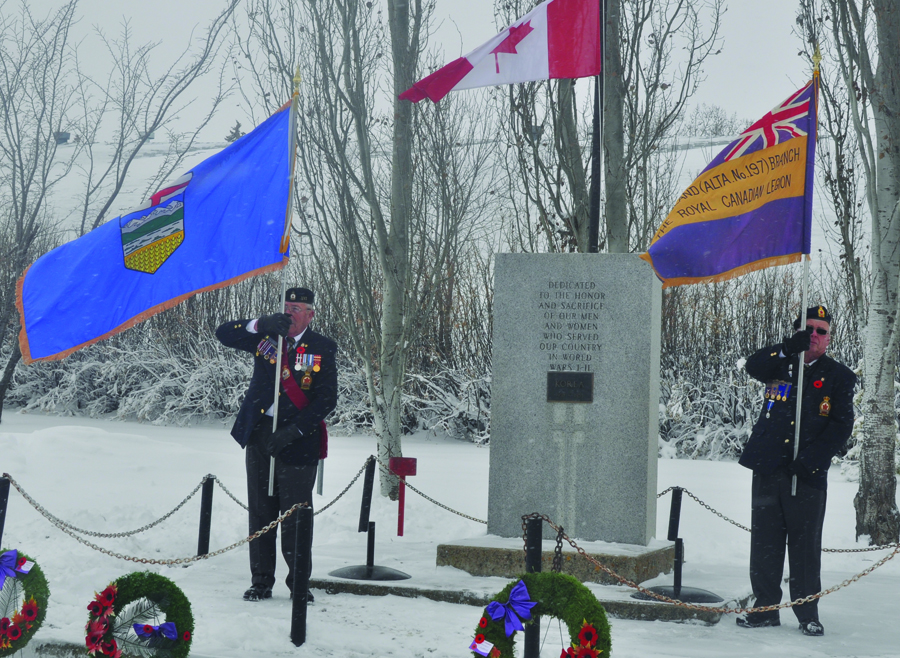 With a year like no other happening in 2020 due to the COVID-19 pandemic, the Bow Island Legion still was able to host a small outside Remembrance Day ceremony at Jubilee Park.
There were  about a dozen people who braved the cold conditions to partake in the service.
“It was really poignant,” said Gordon McCormick, Bow Island Legion president.
“It meant quite a bit. It was excellent-with a little improvisation. I think Legion Dominion Command would have been quite proud.”
McCormick was unsure if anybody would attend the service, but he said it was “grand to see those people show up.”
Mayor Gordon Reynolds appreciated the local citizens that came out to the ceremony.
“Considering the amount of snow we had, it wasn’t the warmest of mornings, (but) hats off to the legion members that organized it and put it on,” said Reynolds.
“It was very important to them and a very important part of their work.”
Remembrance Day has played an important part in Reynolds’ family every year.
“My parents were both veterans who have both served overseas,” he said.
“It changed the course of their lives individually and left a lasting impact on both of them in terms of health and so on … It’s especially important to recognize those who didn’t come home. Small communities like ours that didn’t have big populations still sent people overseas that didn’t come back and that had to have been a huge blow to the community.”