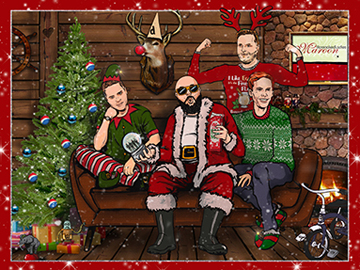 Barenaked Ladies are bringing some holiday cheer to fans across the globe this year ? virtually, with a very special holiday streaming event. Barenaked Ladies Presents “A Very Virtual Christmas” Dec. 18.
“It’s like riding a bike covered in tinsel, lit, with green and red and smelling like a freshly-stoked fire,” described BNL drummer Tyler Stewart, while discussing the task of dusting off the tunes from the band’s festive collection “Barenaked For The Holidays” to play live during the unique online event.
Like favourite variety shows from holidays past, this ultimate holly and jolly experience will feature sketch comedy written by the band, a few special surprises and performances, including holiday fan favourites from the aforementioned treasured gem. There’s also new holiday merchandise available for under the tree, including a jigsaw puzzle, Rubik’s Cube, tree ornaments and the ever-popular ugly sweaters.
Simply put, Stewart joked the band realized 2020, in a word ? “sucked.”
With recommendations from health officials warning about not getting together with families and friends and keeping celebrations small due to the current COVID-19 pandemic, Stewart said it’s such a bummer, and everyone is forced to give Jeff Bezos (founder of Amazon) even more money, he also joked.
In Toronto, even the stores are closed, Stewart explained earlier this week. “So, you can’t even Christmas shop.”
“We thought, what’s a good way to blow out the blues we’re feeling. For Barenaked Ladies, one of the greatest things is for us to get together in a room or on a stage and have a laugh and enjoy each other and play our music. That’s the gift we have for each other and as a gift to the fans,” Stewart added.
Stewart noted the band thought let’s celebrate this very bizarre Christmas by doing something original and fun, “because we have all of this Christmas music just sitting there waiting to be played.”
“If people don’t want to dust off their CD players or dig through a mountain of Amazon packaging cardboard and find their CD collection ? we could play songs from our 2004 release live and enjoy each other and see if we could remember the chords and celebrate Christmas in a virtual way,” Stewart said. “We’re not too rusty and we are going to have a day of rehearsals, so we can get these songs back together.”
According to Stewart, the main goal of the virtual Christmas cavalcade is to have fun with each other and for the fans. “The fellowship of playing and being back together and also, for the fans.”
“What a nice Christmas treat,” Stewart added.
Stewart pointed out he believes everybody is kind of used to, or is burnt out of staying indoors and consuming Netflix and other binge-streaming platforms.
“At least in this case, we’ve got some live music and a few comedy things planned, as well. I think it’s going to be a nice reprieve from your regular programming. We hope people tune into the live stream and celebrate with us, as we will demonstrate we’re actually having a lot of fun doing what we do ? because we haven’t been able to do it,” Stewart explained.
Even though 2020 has been a rough year for all Canadians, BNL has done a bit of work throughout the year, which includes gathering in the studio and finishing off a brand new album. “Which is great. We had three weeks in the studio in June,” said Stewart. “We were able to finish it off and had a really great time.”
BNL also stayed busy during quarantine with Facebook live streams ? along with their #SelfieCamJams ? performing deep cuts and fan favourites from their homes, even bringing in surprise guests.
Stewart said, with the new album complete, the aim is to put out a single in late January 2021 or February. “Maybe to blow away some winter blahs.”
“The album, we’re hoping, is coming out in the spring, in advance of our tour we have planned. My fingers are still aching from being crossed ? hoping this summer our ‘Last Summer On Earth’ tour goes as planned,” said Stewart.
“Hopefully, we’ll have a new album, there will be a vaccine, everyone will get it ? and we’ll go on tour and people will be back in front of us like they’re supposed to be,” Stewart noted.
With “A Very Virtual Christmas,” BNL fans can expect some great songs, a few laughs and last (but not least), “homemade egg nog,” Stewart joked. The must-see live stream event will be hosted on sessionslive.com. Tickets are $15 USD and seasonal merchandise and ticket bundles will also be available to purchase. Show starts at 9 p.m. EST or 6 p.m. PST.