Jim MacArthur will retire from Stampede 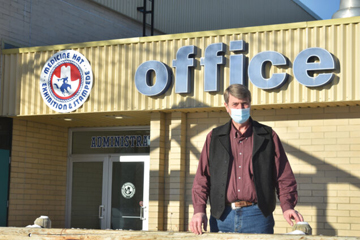 Medicine Hat Exhibition & Stampede general manager Jim MacArthur has announced his retirement and will work his last day on Feb. 20. He says Medicine Hat will stay his home and that he is looking forward to more time spent with family.

Another well-known figure in Medicine Hat will soon be heading into retirement.
Medicine Hat Exhibition and Stampede general manager Jim MacArthur will be calling it quits soon, with his last day of work on Feb. 20.
MacArthur has spent most of his life in southeastern Alberta, growing up in Walsh and working for the Stampede for 20-plus years. Now at 61, MacArthur says the time was right to hang ’em up.
“When you get to a certain age, you start to think about it more,” he said. “There’s some things left on my list that I still need to get to, and I definitely owe some time to my family.
“The pandemic has really put a light on family for a lot of people and that includes me as well.”
MacArthur has worked with the Stampede twice in his career, starting in 1984 to 1987, then rejoining the organization from 2002 until present day.
“It’s a varied and intense job, and it’s enjoyable,” he said. “The business relationships and friendships that evolve over the years in being in a role like this are so valuable.
“This is a great community that we have called home and will continue to call home.”
During his years with the Stampede, MacArthur saw myriad events happen and witnessed hundreds of thousands pass through the Stampede Grounds. He says the 2017 Friday Night Rodeo is one of many events he looks back on proudly.
“The Grounds were full of people, the weather was beautiful and the rodeo was just perfect under the lights,” he said. “The grandstands were full and people were on their feet. People were waving their cell phones in the dark and it was just a really special night.
“That was a really proud moment for me as someone from Medicine Hat.”
As for his biggest challenge over the years, COVID-19 has been tough to navigate through, says MacArthur.
“We’ve been in this for such an extended period,” he said. “We’ve had to put off a lot of popular events, including the annual Stampede.
“We always had to deal with weather as well and that was really tough over the years with outdoor events.”
MacArthur says he is looking forward to the next couple months of work before taking a step back.
“I definitely want to get out on the trails and keep active,” he said. “I’m not looking for a new job, but I want to stay involved in the community when possible.
“I just want to thank everyone I’ve worked with over the years and all of the volunteers who gave their time and energy to the Stampede.
“It has been quite memorable for me.”