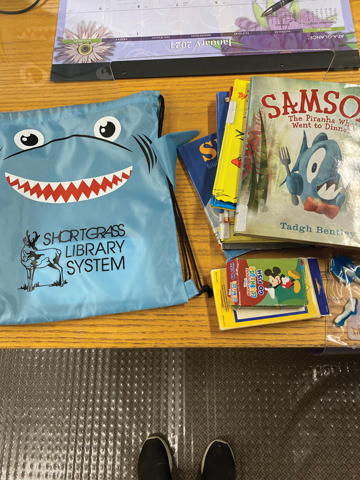 FUN KITS: A picture of the Go Fish kit that is available at the Irvine Community Library.

The Irvine Community Library began making up pandemic survival kits recently to hopefully address its initial concern of what people have access to.
The concept began discussions in early December.
“We came up with the idea because we were concerned about people, because the library’s closed and so many other activities are closed,” said Joan Côté, library manager.
“People, with the lockdown, are not having access to the kind of things they like to enjoy and not meeting with people very much. We started kind of brainstorming ideas of what we could do to help them get through it all.”
Côté says the first idea was geared towards the older people and not families necessarily.
“We were thinking like a comfort kit,which would be a book, tea and cookies ,” she said.
“Or a date night kit, which would be a DVD and microwave popcorn. Then one of my board members happened to go out to a friend of hers. The friend was going through all of her children’s things and selling a whole bunch of stuff. She thought this would be cool, this would be a lot of really cool things we can use to put in to kits for kids.”
Now the library had a dedicated table with games and puzzles that Côté is gradually putting the kits together with.
“I had created two more this afternoon (Jan. 13) besides the ones (five total) I listed in that email,” she said.
“One’s a memory match game for little kids and ones a Big Bang Theory for adults. And it’s a Big Bang trivial pursuit game with the final season of Big Bang and then some books on astrology and that stuff all put together in a kit.”
Côté has made other kits including: Sock Monkey, Go Fish, Charlie and the Chocolate Factory and Judy Moody pasta kit.
“Each kit has a sheet that goes in it that tells what things have been put into it and what they have to return to the library” she said.
“Every kit has a package of masks because the library is a dispersal point for masks anyway. It’s one good way to get them out there. And every kit includes treats of some sort and then either games or books. There’s a list there that we can use to repack it or to check it when it comes in.”
The pandemic survival kits’ items were donated to the library over the past year.
People who are interested either in donating kit items or a kit can contact the library at (403) 834-3437.
The kits are distributed to Shortgrass Library members only.
“It’s a curbside pick-up,” said Côté.
“So they would have to drive out to Irvine to pick it up.”