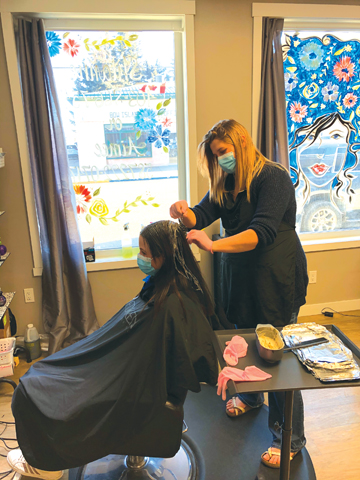 Photo submitted by Shianne Den Hollander Lux Hair Studio stylist Miranda Eskeland gives Brianne Aylwin a hair cut on Friday . The Bow Island hair studio was able to reopen on Jan. 18 ,as per a provincial government announcement on Jan. 14 that hair salons were included in the latest restrictions that were lifted.

Bow Island’s Lux Hair Studio stylist were back cutting hair on Jan. 18 after hair salons were given the green light from the provincial government on Jan. 14 to resume operations.
The doors opened for the first time since early December when stricter measures were put into place.
“It’s been very busy,” said owner Shianne Den Hollander.
“It’s been about five or six weeks and we have a lot of clients that after their last appointment, they’ve pre-booked their next ones for four, five, (or) six weeks down the road. From the last time we would have done them— it’s been that time already— so we would have had this whole week already booked and now we have people messaging that weren’t already booked in to book in. We have two or three times the amount of people phoning us as we normally would in a day.”
Lux Hair Studio began with the clients they could not get in before the December shutdown and are working on the clients that phoned in more recently.
She says she will need a good few weeks of full days of work to catch up.
“I don’t normally work a full day anymore just because I have three kids at home,” said Den Hollander.
“In order to catch up, I do have to work a lot more to catch up and get myself back on track to where I was when we had reopened in the summer.”
She is not booking in any new clients until February.
She has felt grateful through these last 10 months to have loyal clients.
“I know that when we do get shut down and reopen that most of the time that they’re going to be back,” she said.
“But throughout these shut downs too, it’s also given people an opportunity to realize that they don’t want to colour their hair anymore or they’re OK with not coming all the time to get haircuts. That cuts back on our income when they’re not coming as often anymore or not at all.”
Den Hollander’s co-worker Aimee Voeller said the shutdown wasn’t ideal and puts on a little financial stress.
“I’ve been thankful that my fiancée has been able to be working the whole time,” said Voeller.
“I understand the government had to do something. But it definitely wasn’t great being shut down, but happy to be back working.”
Voeller had over 60 clients to reschedule from December and into January.
“I think (last) week, I’m doing almost 10-hour days for six days out of (last) week. I’m booked until the middle of February right now, I can’t take anybody until then,” said Voeller.
Despite being shut down in December, Premier Jason Kenney praised hair salons back in November.
“We kind of expected back in November that oh maybe we’ll get shut down for a couple of weeks and then we could hopefully reopen before Christmas and work all through Christmas,” Den Hollander said.
“He praised salons and said that there’s been no reported cases transmitted through a salon and that we’re doing really well. I feel like out of every other industry, we were the only ones mentioned saying how well we were doing. So to turn around and shut us down is a bit of shock.”
Den Hollander said it was very frustrating when the government shut down personal services because they are not essential
“To us, we’re essential, because how do we support families,” Den Hollander said.
“I know so many other people in the city, friends of mine, or who are single parents, and that’s the only way they can provide income for their family.”