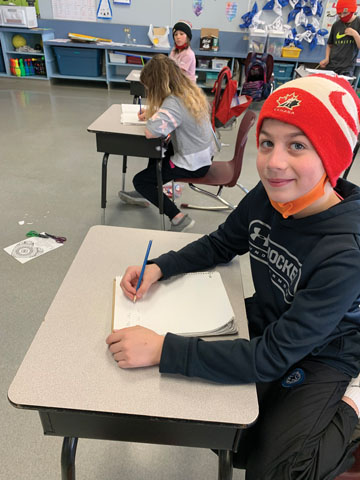 Photo Submitted Grade 4 student Cole Chisholm prepares a letter to be sent to a Chinook Village resident on Friday.

Lana Christmann’s Grade 4 Seven Persons School class has been working on their writing skills recently through the Pen-pal project.
The project is in its first year at the school and allows the students to pen letters to the Chinook Village residents and the seniors have the opportunity to write back to the kids.
Christmann and four of her students presented the project idea at Prairie Rose School Division’s virtual board meeting on Feb. 9.
“The idea of this came a couple of years ago and I tried with another retirement home last year, but it fell through on their end,” said Christmann.
“I didn’t want to give up on it because I think that there’s so much that can be learned from having grandparents and seniors working with kids—I just think there’s magic there. Just from my own experience, I used to write letters to my grandmas back when I was a young and I still have them. They’re like a treasure and (I) want them to have that connection because despite the years between seniors and children, I think they have a lot of similarities.”
The other reason for the project is because Christmann wanted the students to have training in the art of writing letters.
“I think that is kind of lost nowadays with texting and emailing,” she said.
“I wanted them to have that feeling of excitement when they actually touch a letter and when they write a letter, they have pride in their penmanship and just that anticipation of getting and receiving letters, I think is so important. So it’s for a purpose and not just to write.”
She said with COVID, the writing brings some joy to both the kids and seniors with this difficult time.
“It’s also created a lot of compassionate empathy and I definitely see that in their letters and how they get excited,” she said.
She hopes to make the project a part of her class ever year.
The letters are dropped off to Chinook Village front desk before being delivered to the residents due to COVID.
This is the third time that Chinook Village residents have participated in a Pen-pal project with elementary school students.
“This time in particular, one of the residents commented how it filled her with so much joy to see the letters from the students and that she can’t see her own grandchildren right now, so this has been just such a lift to receive these letters from the Grade 4 class,” said Melissa Schlenker, recreation assistant at Chinook Village.
“It’s so important for us to feel like we’re part of a community not only within our own building and the residents here, but a part of the larger community.”
After hearing some of the students read out their letters during the virtual meeting, the project gained some great remarks from the local trustee.
“It just almost makes me want to pick up a pen and write to somebody,” said Seven Persons trustee Graeme Dennis.
“They probably thoroughly enjoy receiving the letters from the students and that’s just a huge thing for them as well. You know, that’s community spirit at its best. They probably don’t get that many letter written to them and they’re of the generation that would appreciate those letters very much.”