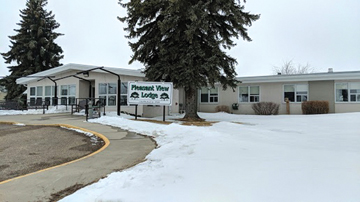 Fifty-five of the 60 eligible Pleasant View Lodge residents received the two doses of the Moderna COVID vaccine as of Feb. 4.
Only five residents refused to take the vaccine The Lodge’s Chief Administrative Officer Karen Waldbauer says those are the same residents that refused the flu shots.
“They just don’t do inoculations,” she said.
The first dose was administered on Jan. 14 and the second dose on Feb. 4.
“We were very fortunate,” said Waldbauer.
“It does help we do have a contract with Alberta Health Services, so then we became on their priority list.”
Waldbauer says the Lodge had no trouble since the residents have been vaccinated.
“(With) the first shot we had no one and the second shot, we had a couple of people, they felt kind of week in their legs a little bit,” she said.
There were 10 staff members who were administered the first dose of the vaccine on Jan. 14 because they were building.
“Whoever was on staff got the first shot and the rest of us—there’s four of them that have—and the rest of us have appointments,” said Waldbauer.
“Some of the staff are not real keen on having the shot.”
The second doses were done by appointment in Medicine Hat.
“It hasn’t changed anything according the chief medical officer of health (Dr. Deena Hinshaw),” said Waldbauer, on the residents getting vaccinated.
“We still have our two designates per resident that can come in and they can only go out for essential appointments. We were kind of hoping that we had the shots, that it would open a bit, but it’s not so far.”
The AHS contract allowed the Lodge to provide a higher level of care and is the reason and helped the facility get their vaccines quicker.
Alberta Health Services provided a statement for long-term care homes, which includes the Alfred Egan Home.
“87 per cent of residents at long-term care and designated supportive living facilities have now received both doses. AHS is working hard to offer second doses to all residents between three and four weeks after they receive the first dose,” said Tom McMillan, AHS’s assistant director for communications.
We will be expanding to start offering the vaccine to all other facilities as soon as possible. We had hoped to start this several weeks ago but had to postpone it because of decreases in the supply of vaccines arriving in Alberta. The supply is set to increase in the coming weeks, so we hope to start giving the vaccine to all seniors age 75 and older as soon as possible.”