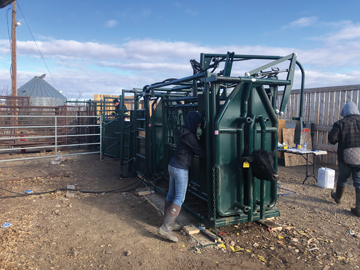 Cypress County agriculture producers, Dustin Vossler and Kody Traxel, discussed some agriculture improvements that have helped the industry along.
Traxel feels as though the Growing Forward programs helps with vaccines, buying facilities, dirt work and moving water.
“Those programs are very important for the producer too because you could actually afford to maybe like even just for example, Dustin was talking about giving vaccine,” said Traxel.
“On the bottle it’ll tell you how many millilitres to give per 100 pounds. If you look at an animal, it’s a pretty shot in the dark to guess how much that weighs. Now with those programs, they’re paying like 40 or 50 per cent for scales. When you run your animal in the chute, they’re on a scale, it tells you a weight—you can accurately treat that animal. I know some producers that were kind of against the ‘Awe I don’t need to weigh them and stuff.’ But now that they’re weighing them, he said ‘I have saved money,’ on vaccines to pay for the scale because he was over injecting.”
Traxel said the drug companies have done a good job saying the animal will perform at this many millilitres— if you are over it or under it— it’s not doing a proper job.
He added the new handling systems are much safer.
“Before you stuck (the needle) in there and hopefully you don’t get your head kicked off,” said Traxel.
“Now you can feel pretty comfortable working cattle.”
Traxel said working with responsible veterinarians is very important to the health of the cattle.
“They’re explaining to us how we’re suppose use these products,” said Traxel.
“They don’t jump to the most powerful treatment right away. Sometimes there’s better ways of doing things.”
With the veterinarians advice, Traxel has noticed his livestock have become more healthy.
A neck extender became a valuable item in the vaccination process.
“Their idea behind it was for vaccinations and not breaking off needles,” said Vossler.
“When we first got these neck extenders, we were like ‘these things suck,’ and we’re not using them. Now that you use them and you’ve got used to using them— well they’re the best thing in the world —because it actually demobilizes the animals so you can actually treat them and they’re not fighting you while you’re trying to do it.”
Another pivotal initiative the government has announced is that producers can sell their product right from the farm.
“It’s a huge marketing opportunity that we have no way of conveying because we can’t take the time to do it because we don’t have the 300 publishers sitting, writing and doing stuff like this,” said Vossler.
“We’re just average joe schmoes who want to move our product to the end consumer and do a good job of it in between. There’s a huge marketing campaign that the agricultural community is missing out on. It is getting better—the Alberta Beef Producers are getting really good into it and a lot of other figurehead organizations are doing a really good job of trying to promote this.”