Researcher wants to hear from local farmers on cover crops 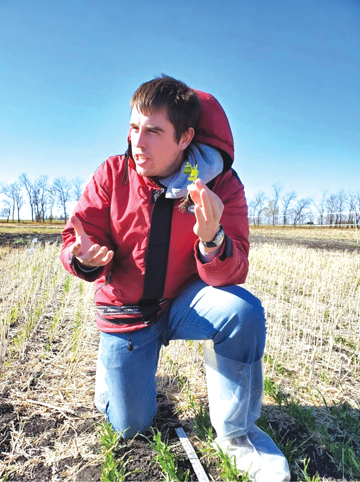 A post-secondary researcher that is based out of the University of Manitoba wants to hear from local regional farmers to gain a better understanding of cover crops in the area.
Callum Morrison is conducting the prairie cover crop survey across the three prairie provinces and Ontario in conjunction with Dr. Yvonne Lawley.
The duo are conducting the first ever cover crop survey and the current goals are to learn the extent of cover cropping, why cover crops are being grown and determine how farmers are fitting cover cropping into their rotations.
“Farmers are wanting to know more about this information and it’s just not there at the moment,” said Morrison.
“They’re looking at enviously of the information that’s coming out of the States. A lot of them still aren’t sure of how cover cropping could fit into their existing systems. They have questions like how effective (it could) be for them, they want to know what benefits they might see, they want to see what challenges (there are). There are all these questions that researchers really don’t know.”
The Scotland native realizes he is a transplant and feels this project will allow him to understand Canadian agriculture and topic that allows him to connect with farmers in all three prairie provinces and reach out to all regions.
“I’ve just got such a great opportunity to learn and potentially benefit all these farmers in all these different areas,” said Morrison.
The cover crops have two major forms in Alberta, including a fall season cover crop which sees farmers harvest their cash crop and have another crop growing.
Then there is a shoulder season cover crop, which according to Morrison is quite popular on the prairies and grows over the entire season and is meant to combat compaction and can be utilized as feed for cows.
“Common misconceptions (are) cover crops are only grown by organic farmers,” he said.
“I meet a lot of farmers who tell me ‘Oh it’s only organic.’ I’d say just as well that a lot of farmers are maybe skeptical about what exactly is possible with cover crops. There is a small number of really innovative farmers out there who are really pushing boundaries of even myself and my professor thought were possible. I think it’s getting those stories out there is what we need.”
The survey is also opened to farmers who haven’t grown cover crops at all or in the last year.
“That’s hopefully going to give us a much deeper insight into what it actually happening across the prairies,” he said.
“It’s just as important to hear from farmers who’ve never grown cover crops or that did grow cover crops, but then stopped growing. We need to identify what challenges (that are) really limiting cover crops and we can identify mitigation methods to assist farmers to make sure they’re not going to have these challenges. But it also allows to see what is actually possible in the future because I do not think every farmer will be able to use cover crops.”
The survey c be taken online at https://www.surveymonkey.com/r/prairiecovercrops2020 until April 1.
The survey has been out since October 2020 and has had over 400 responses from the three prairie provinces.
Morrison said a third of the responses are from Alberta.