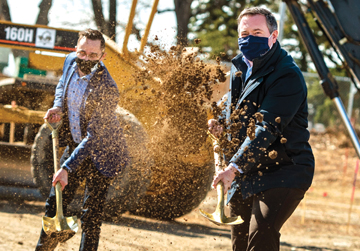 The shovels officially dug into the dirt on March 31 at the Lethbridge Exhibition Centre.
Construction has commenced on the 268,000-square foot Agri-food Hub and Trade Centre, the largest development project in the history of Lethbridge & District Exhibition, at the official sod-turning ceremony Wednesday afternoon at Exhibition Park with Alberta premier Jason Kenney onhand to help dig in.
The $70.5 million project, managed by Ward Bros. Construction Ltd. of Lethbridge, will create nearly 400 construction jobs over the next 20 months. Up to 50 new, full-time permanent positions will also be created to operate the facility when it opens in early 2023.
Kenney said Wednesday’s ceremony was good news at a time when Alberta needs good news.
“This investment is a great example of Alberta’s recovery plan at work,” he said. “As we continue to diversify our economy with this success in the agri-food sector, this investment means more jobs right here in Lethbridge and more investment for the entire southern Alberta region and our province. The redevelopment will generate over 400 construction jobs and 50 permanent full-time jobs after construction is done.”
The new facility will double current hosting capacity to accommodate more and larger national and international events with up to 7,000 people. Once operational, the Agri-food Hub and Trade Centre is expected to contribute more than $90 million every year to the regional economy.
“It’s more good news for the City of Lethbridge and Alberta’s critical agri-food and farm sector,” said Kenney.
“Alberta taxpayers spent $27.8 million in Exhibition Park to get this construction of Lethbridge’s very own agri-food hub underway. As part of the larger redevelopment, the agri-food hub will serve as an anchor for growth in Lethbridge’s food sector while continuing to diversify Alberta’s economy in providing a local market for farmers in southern Alberta.”
The Agri-food Hub and Trade Centre is funded by the Government of Alberta through Alberta’s Recovery Plan, the City of Lethbridge, which will maintain ownership of the land, and a 30-year loan secured against the future operations of the facility.
“This long overdue investment will allow the economic impact of the Lethbridge Exhibition to grow even more, serving thousands here in the city and the surrounding areas,” said Kenney.
“Lethbridge is part of Canada’s premier food corridor. That’s why we’re working to create new opportunities to diversify the economy and expand southern Alberta’s agri-food sector. This is key to creating good jobs both today when we need them and as we emerge from this crisis and in the face of the challenges that our economy has experienced from the past several years.”
The project also increases the space available for food production from 800 to 12,000 square feet, more than a 1,500 per cent increase, said Kenney.
“It means even more possibilities for practical learning experience for students at Lethbridge College, for example, in their ag and culinary programs, which are world class.”
The Lethbridge Exhibition will celebrate its 125 anniversary in 2022, said Lethbridge mayor Chris Spearman.
“What a year that will be,” he said. “Many years of dreaming will see a vision become a reality. This vision is one the community was eager to get behind.
“The Agri-food Hub and Trade Centre is going to ignite economic growth, not just Lethbridge and the southern Alberta economy, but also for Canada’s agricultural industry. Showcasing southern Alberta’s value-added products will create interest nationally and from around the world in Canada’s premier food corridor.
“It will attract more traffic both from within the community, but more importantly from throughout the world, to come to Lethbridge. This will generate more direct flights to our city, increase demand for hotels and generate new investment in our community.”
The Agri-food Hub and Trade Centre will also trigger work experiences and quality employment opportunities for students and graduates at Lethbridge College and the University of Lethbridge, said Spearman.
“This invesment in the new agri-food hub and trade centre at Exhibition Park will support and enhance our reputation as a gateway to opportunity for students, businesses and investors.”