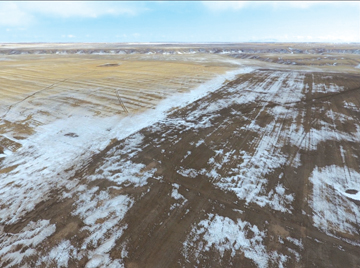 Photo submitted by Stacey Barrows The March 29 snowfall left scattered patches of snow and very little accumulation of moisture in some parts of the County of Forty Mile. With the high winds being experienced lately, more spring moisture is needed to carry farmers into the hot, dry summer months.

For the most part the seeding season is looking good, says County of Forty Mile Agriculture Service Board Chair Stacey Barrows.
“There seems to be in most cases good moisture so far, providing the winds don’t keep up,” she said.
“If the wind keeps up it’s going to dry it out quick.”
Barrows says it’s too hard to say if there are areas better than others for moisture because the moisture is so scattered.
“Some areas have had more snow than others and the snow stuck around longer,” she said.
“I know in the east part of the County, the Orion area, they’ve just started getting their spring melt. Their snow seemed to last a lot longer. It’s hard to say, it could be moister there, but it depends on the winds—sometimes it dries up the same speed.”
The November storm played a factor in the strong seeding conditions.
“We had a fair dump, (during) that first snow fall in November and it’s (been) around for a long time,” she said.
“It didn’t melt off right away and then we had that cold spell in February where it stayed cold long enough, it drove the frost a little deeper.”
On the irrigation side, a lot of the topsoil has blown away.
“It’s (the wind) just taken the top soil across the road to the other ditch,” she said.
She does not foresee any seeding season challenges yet unless there is another snowstorm.
“The forecast looks good for the next few weeks and as general rule we always try to wait until after Easter to start seeding,” she said.
“We’re not seeding dry like we have in past years.”