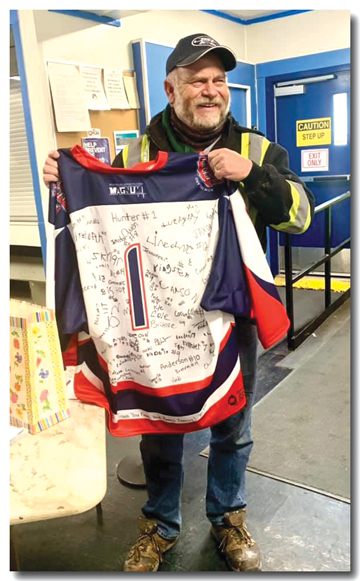 Doug Conquergood just finished his 33rd season as arena operator at the Servus Community Arena.
Conquergood began following his uncle Ken, who was the rink operator for 12 years, to the arena at the age of five.
He then went off to college in the early 1980s before deciding to return home to Bow Island to the family farm and ever since has found himself running the town’s arena in the winter time.
There was 10 years in between Uncle Ken and Doug running the arena.
“The best thing would be watching the enjoyment of the kids being able to play in their sports,” he said.
Doug was able to watch his son, Dustin, play hockey from when he started until he was done and daughter Amanda figure skate.
Amanda is now the figure skating instructor in Bow Island.
His memories this far at the arena include seeing many championships come through the rink and young figure skaters winning gold medals.
“To do a proper job, you have to love the sport of hockey or figure skating and I was fortunate enough that both my kids were (a) hockey player and figure skater,” he said.
He considers himself a fan in the stands when not doing rink repairs.
“I know every kid that comes through the door,” he said.
Conquergood had a feeling of excitement when he was able to open the rink back up after some COVID-19 restrictions were lifted a couple of months ago.
“It was great to see on their faces all the excitement and of them being able to come back and play their sports again,” he said.
For Conquergood, trying to run an arena amid the COVID-19 pandemic has been a whole new territory for him.
“This is the first time I’ve ever had to deal with all this lockdown and stuff like that,” he said.
During the two-and-a-half months when there was no team sports allowed under COVID restrictions, the Town of Bow Island kept Conquergood on and he did building repairs.
“It was very hard actually because I would there in the morning at 7 a.m. and I’d leave at 3:30 p.m.-4 p.m. and I wouldn’t see anybody else,” he said.
“They would just bring the supplies to the arena and I would just do the repairs and stuff like that.”
Teams were able to participate in practices at a limited capacity back in February and Conquergood was pressed into action to “save the ice.”
“We were told on the Thursday that there wasn’t going to be no more hockey for the season,” he said.
“And Saturday morning I get a text from one of the hockey moms saying, ‘Doug did you hear on the radio that they’re going to allow hockey again?’ I go ‘No, I haven’t heard.’

And about five minutes later my boss had phoned me and said ‘Doug, is there any way you can save the ice?’ because on (the) Thursday I had started taking the ice out— so I had already taken three-quarters of the ice out. On the Saturday morning, at 9 a.m., when they said ‘OK, let’s try to save it.’ I went back, got the ice plant running and did ice repairs and built the ice back up. It took me another six to seven days to fix the ice and then the kids were able to skate again.”
The 58-year-old plans on staying at the arena until he is 65.
“The arena is my second home,” he said.
“If I’m not at home, I’m at the arena. Like say it’s not my shift and there’s a bunch a young kids playing hockey, I’ll go and watch them just to support them.”
Bow Island Mayor Gordon Reynolds is a former hockey parent/coach and appreciates what Conquergood has done for the arena.
“I’ve had the pleasure of coaching with Doug and had a great time doing so,” said Reynolds.
“The Town has been very lucky to have had him return for so many seasons to be the lead operator of our facility.  That continuity is very important especially in an older building and Doug knows this old building inside and out.  He has worked hard to keep it and the equipment in good condition and works well with the public.”
Conquergood’s efforts have not gone unnoticed among Bow Island Minor Hockey brass and parents.
“To BIMH, Doug is the rink—simple as that,” said Chantel Timmons, BIMH president.
“He is always there when we call on him on a Sunday evening to say someone forgot something at the rink over the weekend, or is willing to show up first thing in the morning to meet a team and unlock the doors so they can grab uniforms for their road game that day, he will grab players skates and sharpen them quickly in between periods because he sees they have lost an edge. Doug cares about the rink, he cares about the ice, and most importantly he cares about the players in the rink. He goes above and beyond.