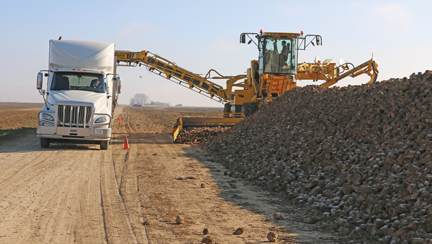 The Alberta Sugar Beet Growers and Lantic Inc. have signed a new agreement that will be in place for the next two years.
Contract negotiations have been in the works for the last two years.
Virtual meetings were held with growers to discuss contract details, which included a new model of payment.
Growers will now get paid once the beets are delivered at a time of harvest and for the sugar percentage within those beets.
The payment method used to have it where growers were paid based on the tonnes of sugar extracted from the sugar beets.
The agreement will also see the price for growers not impacted by long term pile storage or factory performance.
There will be a minimum of 24,000 acres contracted annually for growers as well investment into receiving stations for beet delivery.
“It puts more of the onus on the company to process the beets in a timely manner. Once it’s across the scale, we don’t worry about whether there (is) problems with the piles or anything, that’s up to them to manage that part of it,” said Bernie Lyczewski, president of Burdett/Bow Island Sugar Beet Growers.
“I was on the conference call and there weren’t any negatives about it. Everybody seemed quite happy. There are going to be a few more dollars than what we are getting now.”
Lyczewski says the agreement gives ASBG some security.
“We know that we’re going to have beets for the next few years,” said Lyczewski.
“We’re going to try this type of a contract for these two years and if it works out the way we hope it will, then there’s a possibility of extending it for another three. I think a lot of growers have been asking for that for a long time, but we were never ever able to negotiate that with the company.”
Around 200 farm families in southern Alberta grow sugar beets as a part of their farm plan.
“Sugar beets are a staple crop here in southern Alberta that have been grown for generations by our farmers” says Gary Tokariuk, president of ASBG.
“Farming is a predominately family business where you have to focus on being economically viable, socially acceptable, and environmentally responsible while ensuring it exists for the next generation. We wanted to bring a contract back to the growers that will deliver on those priorities so that it can be grown for many more generations.”