Redcliff council approves a temporary patio for Who’s on Third 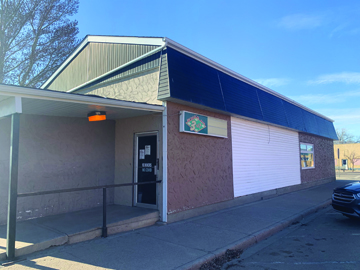 Commentator/Courier Photo by Justin Seward Who’s on Third will be constructing a temporary patio on the gravel parking lot at the rear of the building and into the alley way.

A temporary patio request from Who’s on Third led to Redcliff town council coming up with a compromise on April 12.
Who’s on Third owner Chris Czember’s initial request was to have a patio location that will take up existing parking stalls and the sidewalk for the business.
“In light of the newest COVID restrictions enforced from the Alberta government, Who’s on Third is asking for permission for a temporary patio,” said Czember.
Czember said the barrier of the proposed patio would be up to Alberta Gaming, Liquor and Cannabis.
Council’s worry was if every business asked for a parking lot, then simply there will be no parking.
Council approved the recommendation for administration to give Czember the option of the gravel parking lot and extending into the alley as a compromise.
“We weren’t in favour of the sidewalk and street,” said Redcliff Mayor Dwight Kilpatrick.
Council saw the alley way as a better fit because it makes street parking available.
“And because the way Broadway Avenue has a back alley and First Street has a back alley, so everybody like say the Bakery, or Canada Post can still access back allies either off of First Avenue or Second Street—nobody (is) losing out if we closed that piece of alley.”
Czember agreed with the compromise.
“I thought that was a pretty good compromise,” he said.
“It’s probably a better idea than my initial plan. Really, I never thought about that (and) never considered shutting down the back alley.”
The temporary patio concept comes after the province decided to go back to Stage 1 restrictions with the rising cases of COVID-19.
Bars, pubs, restaurants and cafes to where those businesses are only allowed to provide take-out only or patio service.
Hours of operation would be from 11 a.m. to 10 p.m.
“I am envisioning approximately eight to 10 tables and chairs or picnic tables and a very simple set up,” said Czember.
“I hope Council will understand the unusual situation that we have been put in to try to continue to operate as a pub and approve this temporary patio. I, of course, cannot put a timeline on how long I think we will use it for, that all depends on COVID restrictions, its feasibility, and of course how the summer weather goes. We are just merely looking at this as a possible outlet to let us to continue to operate if we so choose.”
Czember added, “It’s the best way to make hay while the sun shines and it’ll be weather permitted of course.”
Czember was hoping to start building the patio on April 15, with an opening of April 16.