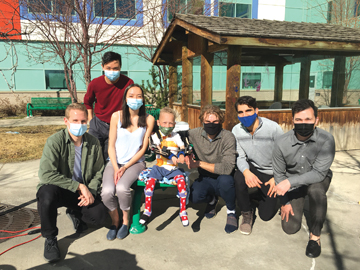 Photo submitted by Rebecca Hintz Reid Hintz (middle) took the opportunity to have a photo taken during a visit to the Alberta’s Children Hospital last week with the ADAPT team from the University of Calgary that is making his exoskeleton.

Seven-year-old Bow Islander, Reid Hintz, was born with arthrogryposis multiplex congenita (AMC).
AMC describes a variety of conditions involving multiple joint contractors at birth.
A joint contracture is a joint that lacks normal range of motion or the joints are stiff and stuck.
Common AMC symptoms include clubbed feet or vertical talus, extended or flexed knees, dislocated and or externally rotated hips, internally rotated shoulders, extended or flexed elbows, flexed wrists, adducted thumbs (stuck-in-thumb) and fingers fisted or extended.
“There are over 400 types of arthrogryposis,” said Rebecca Hintz, Reid’s mother.
“For Reid, he’s labeled in Canada as severe because he is completely affected by all four limbs. When he was born as a baby, he was actually born sitting cross-legged and to extend his legs even hurt to change a diaper.”
The Hintzs may have gotten the breakthrough they were looking for back in March 2019 when Reid was selected for the student-sponsored project at the University of Calgary, where six students from the engineering department have been working on building an assistive living exoskeleton for him.
The ADAPT (Assistive Device and Prosthetic Team) engineering team was spearheaded by Nicholas Perewernycky and friend Austin Ladouceur, and were later joined by Jarod Dimingo, Isaac Ariza, Jaime Wong and Justin Zorig.
“We were first actually interested in prosthetics and we contacted the Children’s Hospital to see what can be done and we were transferred over to Dr. Elaine Joughin (Reid’s orthopedic specialist at Alberta’s Children’s Hospital),” said Perewernycky.
“And kind of from there we got acquainted with one of the OTs (occupational therapists) there and that kind of just went into us meeting Reid and then really just getting to work on the suit, starting with prototyping and moving forward that way.”
Both Perewernycky and Ladouceur started using their biomedical device and psychological developing classes and implemented that knowledge into a case study.
“We had a lot of time in class to work on it and then as we developed our idea more, we kind of came to more of a solution and we realized what we needed and the types of people we needed and luckily one of our friends were more than interested in this kind of area. So, we got a team together of everyone who was interested and started working out a more proper solution and that transitioned into our capstone project (a year-end project that is worked on at the end of an academic program).”
The exoskeleton has currently gone through multiple prototyping stages to try out different motors and different sensors.
“We’re at a point where we have a proof of concept that this could work and that this could help Reid,” he said.

Preliminary testing was initially done without Reid to the strength of components.
“We were designing it to lift a specific amount at the arms—so at the furthest end from Reid —so that was five pounds ,”he explained.
“And then we ran simulations through the solid works models that we developed. And also did it in real life, where we set up a low exoskeleton and tried putting on weights. We also went for more safety testing, so we developed stops for the motor that would not go past Reid’s range of motion. Once we were satisfied with everything in that respect, we brought it over to Reid and Rebecca and we just started fitting the device to him, making sure everything was good (and) he was comfortable. We started out by testing the motors ourselves?so we would actually control the motors and kind of analyze the range of motion that he could go through.”
Reid also experienced a period of Myo electric sensors to see what kind of signal the team could get from that and developed a software so he could control his arms.
“The signals he’s telling his muscles to do aren’t always the right ones,” he said.
“But we’ve had to develop our code around that to be able to filter those out?filter out any noise?and just focus purely on what his intent is.”
The team has made the trek to Bow Island and Medicine Hat twice for testing during the process last month.
Reid made progress recently with picking up a piece of watermelon with a fork strapped to his hand with the exoskeleton on.

He added, “This really has been the highlight of our degrees.”
The team’s next steps are to refine everything and make it something that Rebecca can take home and receive feedback on.
The students’ goal with the project is to introduce a level of independence for children with arthrogryposis to assist with feeding, drawing and playing with toys.
The design includes an affordable 3-D exoskeleton that utilizes two mechanisms to provide support and functionality.
For the first mechanism, an isoelastic system is built where a number of elastic bands will provide a vertical lift and eliminate the patient’s arm weight.
Actuated servo motors are incorporated at the elbow joints to provide Hintz with different positions of elbow flexion and extension.
“We have the clinic and we’re just about done the clinic and Dr. Joughin is like ‘So we’ve got this chance, they (the six engineering students) have to decide on a family yet. They’ve got to do a Master’s project and they’ll do something robotic to help his everyday life,’” said Rebecca.
“And I’m like ‘OK.’ You never turn down help and you never turn down brains. Like this group could think of something that we haven’t thought about. I was like ‘Yeah, let’s meet with them.’ And she’s like ‘Cool, I’ll get Evelyn—she was the nurse at the time— to show you out into the hallway and you can sit and tell Reid’s everyday hurdles.’… We would like him one day to be able to feed himself because that screams independence, if you could do that, you could do anything.”
He has to do school work and playtime while lying on his side as he can’t do much vertically.
“I explained to the team and they’re like ‘OK,’ and they took down all of our information,” she said.
“They’re like we’ll get back to you whether or not we choose Reid, like there’s a few families we’re looking at. And goodness, I don’t think it was 24 hours when I got Nick’s first text message, that’s he’s like, ‘We’re in.’”
“The exoskeleton was hooked on to a hockey chest protector and almost engulfed Reid’s body.
“They had 3-D printed it, but they compensated like it was four times the width of this arms—it was just massive,” said Rebecca.
Reid has had nine surgeries for a total of 42 scars at Alberta Children’s Hospital in Calgary ranging from hernial, to hip and now mostly orthopedic manners.
Reid’s type of AMC is amyoplasia, which there is a one in 10,000 chance of a baby being born with that particular condition.
However, arthrogryposis is a one in 3,000 chance of a live birth.
Rebecca says that Reid has made the family of five (husband Jamie and older brothers Mason and Gage as well) lives full.
“Reid just sucks everybody in,” she said.
“He is the shining star.”
Reid is expected to receive the exoskeleton by the end of this summer.