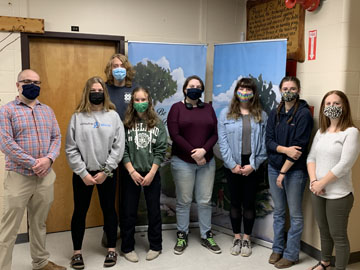 St. Michael’s high school students completed their Youth in Philanthropy (YiP) program in conjunction with the Community Foundation of South Eastern Alberta on May 25 with presentations made to the funding recipients of HALO and the Medicine Hat Women’s Shelter Society.

The annual program is available for all high schools in the southeast region.

Each chosen school was given $1,800 under CF- SEA’s YIP grant and it was their decision as to how to disperse the money.

“It’s a way for students to get involved in philanthropy and community development,” said Sydney Ratzlaff, CFSEA’s office and project coordinator.

“We just feel it’s really important for students to learn these skills about giving, about what it feels like to give out money and just the pride they have in making their community a better place.”

The six students that participated in the YiP pro- gram not only learned philanthropy skills, but they learned about team work by researching and doing phone interviews with the charitable organizations in the region.

“One of things we do at the Community Foundation is make grants to support local charities and we have a committee that sits as the decision makers and the Youth in Philanthropy program is kind of designed
to mirror that process—so they can understand what it’s like to make those decisions and grant out money,” said Ratzlaff.

CFSEA was excited to hear about the choices the students made for their organizations.

“It  was really cool to see the thought process of the students and I think it’s creative that they decided to split it up,” she said.

“They saw two different needs that they wanted to address—both the domestic violence and the safety in the region.”

The six-member committee school each chose two charity organization and brought back to the group for a vote and chose two, before splitting into groups of three to work on each organization.

Anke-Marie Van Tryp, Leigh Hansen and Austin Mastel chose the Women’s Shelter because each student wanted to make a small difference in the world because they felt so many people are stuck in abusive homes and find it hard to get out.

“It was really touching to experience,” said Van Tryp.

“She (Women’s Shelter Society executive director Natasha Carvalho) told us that it would go to the summer kids (camp) and that it would give them a reasonable chance to have a normal summer and get them away from their abusive homes.”

The funds will go towards the Women’s Shelter Society’s summer day camps for kids.

Carvalho said, “We have a great partnership with the Community Foundation. I’m always excited to see their new ways of engaging the community. I think the sooner we can engage our kids at younger ages like this to just really create some awareness for them of social justice and what is really going on in the world.”

Bethany Toews, Peyton Van Es and Emma Vandergaast chose HALO because the students agreed on the importance of the charity and wanted to show their support.

“We thought it benefitted the community the most as we’ve seen in HALO in our community (a) lot and it helps many people that we know,” said Toews.

“Each of learned how to have responsibilities because of the tight deadlines and to pick up our part in our projects. We just found HALO an interesting charity to donate to because they are fully donation directed.”

“We’re very appreciative of this, and I think it’s touching in a way that’s different from (a) lot of other donations, when it comes from youth in the community that’s done some research and picked something that is important to them that’s making a difference in their lives,” said Paul Carolan, HALO CEO.

“And by making HALO the recipient, they’re now making a difference in the community as well.”

Both Megan Schwab and Dave Allen were the teachers that coordinated the YIP Program at the school.