Concerns across the board for proposed Desert Blume subdivision 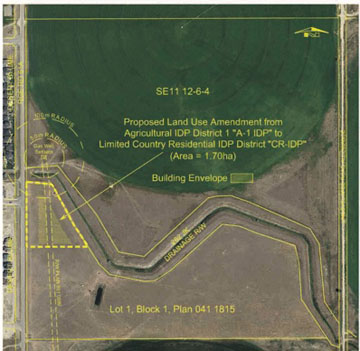 “I think due to maybe technical difficulties, it’d only be fair and equitable to re-advertise the public hearing,” said Vossler.

The County had internet issue during the public hearing discussions.

It was initially recommended by administration to defeat the bylaw at second reading.

Benchmark Geomatics had applied on behalf of Warren Felesky to reclassify a vacant 1.70 acres (4.20 hectares of land) from Agriculture IDP District 1 to Limited Country Residential IDP District (CR-IDP) across the road from Desert Blume.

Limited Country Residential is to regulates the development of limited country residential uses and minor agriculture pursuits that align with the provisions under the Tri-Area Intermunicipal Development Plan.

Permitted use for the piece of land could include an accessory building and uses ( a maxiumum of 5) to existing country residences, coverall building, public parks and playgrounds, swimming pool and a greenhouse to a maximum of 139 metres squared.

Felesky’s plan is to subdivide the one parcel under the Land Use Bylaw from the remainder of the agriculture title if and when this land use amendment is approved by the county and taken through the Municipal Planning Commission.

The land is located along Range Road 61A.

“The proposed reclassification area, as well as the remainder of the agriculture title will have no alternative option, but direct immediate access from Range Road 61A,” as read in the agenda package.

“The proposed reclassification area is vacant, while the remainder of the agriculture land contains dryland pasture.”

The City of Medicine Hat has a gas well located within 100 metres of the proposed reclassification area and a pipeline right-of-way that crosses the proposed land use change in a north/south direction.

Cypress County has concerns over the setbacks required from the existing infrastructure that impacts this parcel.

“Development is required to be setback 40 metres from road centre, 30 metres from the SMRID right-of-way and 100 metres from the gas well. The concern is granting approval for a site where there is issue to develop an acreage. In the rural areas, we need to consider accommodations for a residence, outbuildings and on-site septic disposal.”

SMRID replied that they needed a minimum setback of 30 metres from the edge of their ride-of-way.

There were several letters of concern submitted.

“We are not in favour of the proposed subdivision across from Phase 4 of the Desert Blume Subdivision and Range Road 61A,” said Desert Blume residents Damian and Kim Mannion in a joint letter submission.

“In July of 2020, we took possession of our dream home after two years of deliberating between lots and a considerable amount of time went into the design. Our decision to purchase Lot 10 was based on the area it offered, but most importantly the views to the rear of home, which is exactly where the proposed subdivision is looking to build. To find out now, that there are no real restrictions stated for the proposed subdivision is a frightening thought. That allows virtually anything which would be detrimental to all of home values.”

Curtis Presber, chief administrative officer for The Meadowlands Development Corporation, provided the concerns of what impact this land-use amendment would have on their 83-lot development.

“Meadowlands created an architecturally controlled subdivision and then in turn sold the lots to Cypress County residents under the knowledge that they would be a part of an estate-style community where their investment would have a high level of investment retention due to the integrity of the neighbourhood,” said Presber.