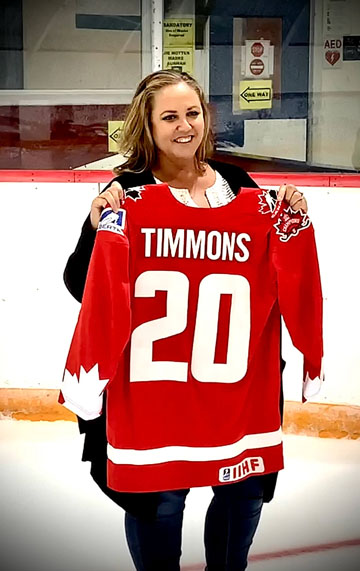 Commentator/courier PHOTO SUBMITTED BY Chantel Timmons Chantel Timmons enjoyed every minute of being on the BIMH board as a member and as president for the past six years.

Chantel Timmons tenure as Bow Island Minor Hockey president officially came to end on May 26, as Jeremy Mitchell was voted as the new president that evening at a special meeting.

Timmons sat on the board for a few years prior 2012, before taking over the secretary position and it was in 2015 she stepped into the president’s role to finish that season.

She ended up holding down the president position for six years.

“Here I am six years later as president and a total of over 13 years on the board, and I can truly say I loved just about every minute of it,” said Timmons.

Timmons will miss a few things about her time on the BIMH board.

“I will miss the meetings and making the teams before each season,” she said.

“And I always tried to be at one of the first practices of the year for each of the teams to answer any questions or help out wherever I could—mostly just to see the kids smiling and laughing and just loving the fact that they were back on the ice for another season. I love seeing those smiles.”

One of the highlights of her time as president was being able to create an information log for BIMH.

“I have saved everything from minutes and agendas to letters written and received, affiliations, amalgamations and joint-team agreements to photos along the way,” said Timmons.

“If there is info needed for the new board and president, it can surely be found on the master zip drive.”

Also, under Timmons’ guidance, a Governance Guide was built and BIMH is working from that manual to maintain consistency as board. The BIMH membership adopted  new bylaws in 2018 that allowed for non-members to become board members when volunteers were stretched thin.

Timmons felt as though she has left BIMH with a knowledge base that will keep the sport going in the town.

“The board of directors currently in place will do an awesome job and all have the same attitude as I had, ‘let’s get these kids on the ice,’” she said.

She will be sticking around as she had agreed to stay on as past president.

“The new president and vice president will have a lot of questions as they navigate; I want to see them succeed so will definitely be just a phone call away for any information they may require. Besides I don’t think I could quit BIMH cold turkey,” said Timmons.

She will still be seen around the Servus Community Arena as she still has her daughter in minor hockey and will be heading to an arena too in a different community if her son decides to play junior hockey somewhere.

“I love the sounds of the rink, the camaraderie and friendships there,” she said.