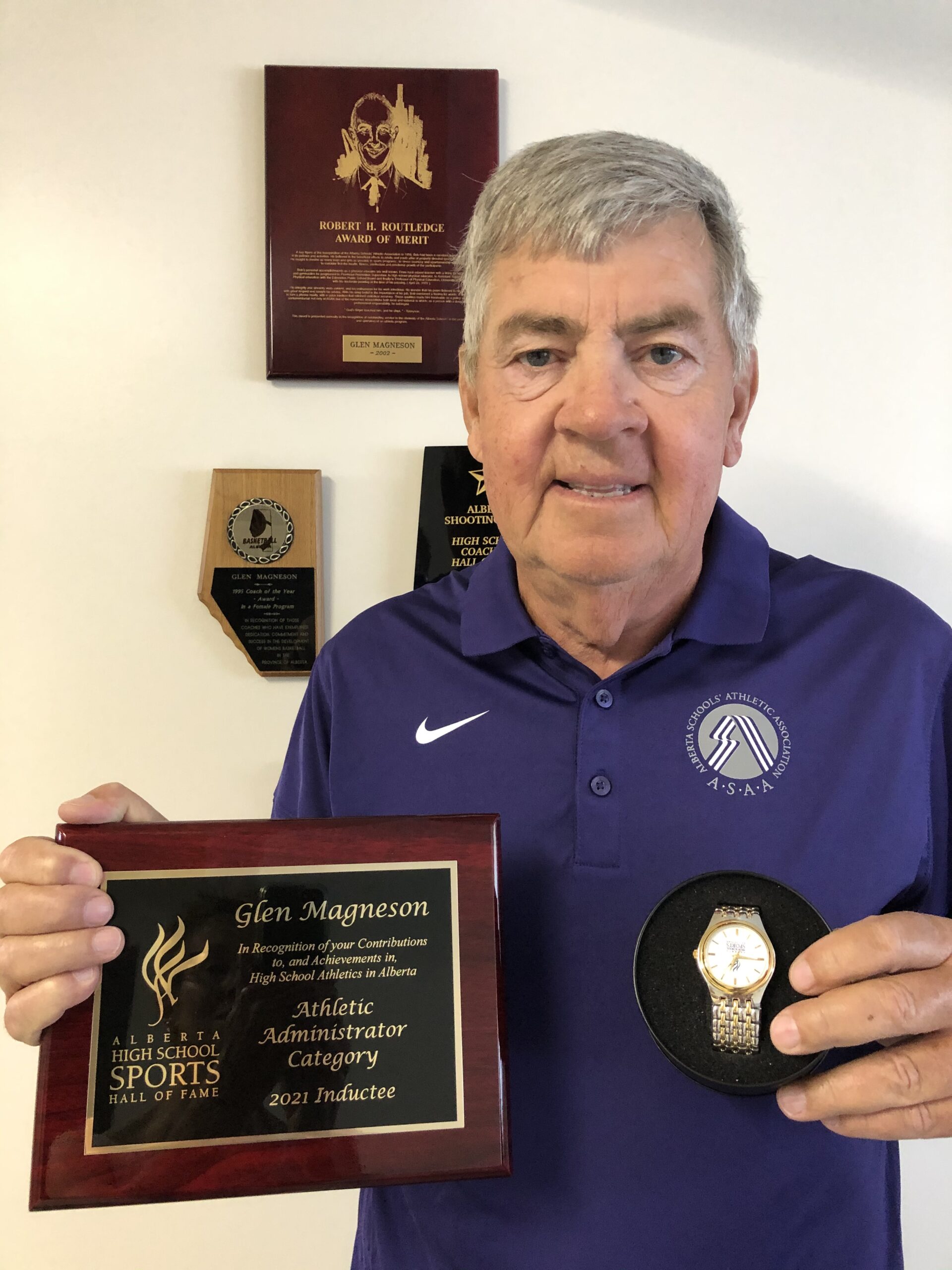 Longtime Foremost School athletic director Glen Magneson was inducted into the Alberta High School Sports Hall of Fame for a second time recently as he was the 2021 recipient under the Athletic Administrator Category.

The award recognizes an individual’s contributions and achievements in high school athletics.

Magneson had no idea he was nominated  for the award until Alberta Schools Atheltic Association executive director John Payton had contacted him.

“I guess it was for the success that Foremost School had while I was athletic director, said Magneson.

Magneson was the athletic administrator at Foremost School for 33 years and his accolades  included 70 Zone titles, 29 Provincial titles, coached multiple teams per year, founded the Foremost Athletic Club to reduce student fees and a former basketball commissioner and ranker.

“It was basically my life when I was a teacher—you know running the athletic program, coaching,” he said.

“I was really interested in having our kids have the best program that I could give them.”

Magneson created the best program for school athletes by establishing an Athletic Club,—which allowed the kids to not have no user fees by running the concession.

“We gave the kids a few perks along the way,” he said.

“And I guess the other way I managed to do it, I had great coaches at the junior and senior high level.I had support from the administration, teachers, parents and kids.”

He retired in 2010 and his hope was that he made a difference for school athletics.

“I put in 33 years—so I hope I made a difference in the lives of our student athletes,” he said.

To him, school sports are a vital part of the school program.

“I think’s it’s as important as many of the subjects and really gives the students a sense of belonging and makes them well rounded,” he said.

His top memories included hosting five provincial championships and improvement of the athletes throughout the years and winning.

“As I think of the memories that stand out are big wins and big losses, but more of  the commitment of student athletes and coaches to make our athletic program successful and fun for 33 years.”

He was nominated by his son Cody, former student Shiela Garber and former colleague Bill Ressler.

“The main reason I nominated by father Glen was because of his commitment to the school athletics and the way he held his students and himself to the highest standards,” said Cody.

“Glen spent countless hours organizing, coaching and running many different programs, teams and opportunities for students in his building and around the province.”

Ressler taught with Magneson for 18 years  back when the school system was known as the County of Forty Mile before there was an amalgamation.

“He was a very organized fellow and he did some rather unique things in Foremost. Anybody that’s involved in high school 1A sports across the province knowns Glen Magneson,” said Ressler.

“We had a super strong athletic program down in Foremost at that point in time. He basically looked after coaches, getting coaches and ran the junior high and senior high programs. He did a lot of coaching himself which takes a lot of time, and it’s understanding that people coach their own kids. But when you’re coaching other people’s kids every year, that shows some dedication.”

The school continues to carry on what Magneson established.

“We are so incredibly proud of this wonderful and well deserved honour for our former teacher and athletic administrator, Glen Magneson,” said Dana Marshall, Foremost School vice principal.

“His legacy has continued until this day – athletics still runs our concession. Our team fees are nearly non-existent, with the majority of our fundraising dollars being put toward athletics. Senior athletes referee junior and elementary games. Our student-athletes still receive a gym bag once they join their first team. Our community association rents us a bus to travel to tournaments, at a significantly reduced rate than the other carriers, and our coaches continue to be amongst the top in the province with several provincial qualifying teams right up until the pandemic disruption. The Foremost community is extremely supportive of Falcon/Forette Athletics. A by-product of having a “community raised” with Mr. Magneson. Our PE classes run a cross country route each year, named ‘The Magneson Mile’ in Glen’s honour.”

He was also inducted in the ASAA Hall of Fame as a coach in 2010 and received the Robert H. Routledge Award in 2002 for outstanding service to the students of Alberta schools in the promotion and operation of an athletic program.