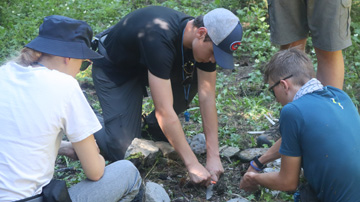 Prairie Rose Public School’s  Dave Rozdeba Flight Academy partnered with Outward Bound to provide ten  students the opportunity to be a part of a week-long survival camp venture from June 28 to July 2 in Kananaskis.

Outward Bound is an organization that started shortly after World War 2 because it was noticed that younger soldiers were dying because of being exposed to the elements and not have the resiliency or survival skills that older troops had.

“They formulated this program and ever since that time, it’s been spreading across the world and they really are a leader in providing students adventures in the outdoors that help develop those skills,” said Reagan Weeks, a PRPS supervisor on the trip.

“So, that was really fortunate. What basically our students did was bush whack right out into the wilderness in Kananaskis and they started fires with splint and steel, (experienced) extreme weather conditions with the heat, they traversed really challenging terrain, built shelters and they cooked every meal. The kids were absolutely phenomenal.”

“So, basically they were given the scenario where the radio equipment had gone and they had to put together a survival plan,” said Weeks.

“ And the whole group of students worked together to create a plan. Some responded to passengers who were experiencing medical emergencies, some built signal flares. They built the fire, they built shelters. It was really a remarkable experience.”

Students earned high school credits as part of the venture including wilderness credits and their standard First Aid training already kicked in when they arrived and worked through the scenarios.

“But really what they’re learning is resiliency, flexibility, ingenuity, team work and the kind of collaboration that is pretty hard to get in other experiences when you compare it to this kind of intensity,” said Weeks.

The Eagle Butte High School senior high students also learned about navigation and how to use a map and compass to direct their way around the wilderness.

The kids back packed the entire time and used creek water with chlorine tablets to stay hydrated.

Weeks found the camp to be challenging.

“It was hard and students rose to every single obstacle,” she said.

“I could not be (prouder) of how they responded to the different challenges throughout the week.”

Wyatt Lehr was one of the students on the trip and described some challenges the group had.

“Some harder parts I guess you could say, is just like moving to different camps every day,” said Lehr.

“And a lot of people found it pretty cold sleeping in a scenario outside. Our backpacks weighed between 30 to 54 pounds and everybody carried their own packs.”

Lehr thought the hikes were a big challenge for him.

“Just going to a different area that I wasn’t used was a pretty big challenge,” he said.

What intrigued him about going on the trip was to learn different ideas to create tools to survive in the mountains.

“It was a great experience with a lot of fun activities,” he said.

Trigger Ellis admits that he is not a survival outdoors person.

“It was not what I was expecting, but I’m still glad I went and it was really fun,” said Ellis.

He learned to be a survival person by cooking outside and making plans.

“I guess the mentality you need to have to not just survive, but also to thrive in the wilderness,” he said.

He thought the hiking  several kilometres with a 40-pound bag in extremely hot weather was uneasy.