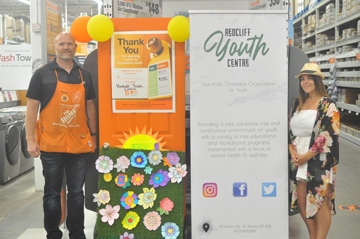 While the Redcliff Youth Centre has been the recipient of funding over the past number of years from The Home Depot Canada’s Orange Door Project, the non-profit organization was chosen as a summer beneficiary this year for the first time due to COVID pushing the recipients over a season from the normal spring cycle.

RYC initially created a relationship with The Home Depot in 2017 after the organization was a recipient of the $30,000 capital grant for renovations.

“So, Team Depot came out and they’re a group of volunteers that are associated with the store. And they came out and saved us thousands of dollars in labour costs. They helped us paint and lay flooring and do a bunch of stuff with our renovations. So, in creating that relationship, we were chosen by our local Home Depot store as the beneficiary of the Orange Door Project.”

“And something unique about this campaign is that we’re a participating organization in the Shaw Birdies for Kids project,” said Ulrich.

“So, all the proceeds that are raised this go around for the Summer Campaign, we get matched up to 50 per cent.”

All funds will go towards the RYC’s preventative programs for youth ages 10 to 17.

“Ensuring that youth have got vital and accessible resources that educate them about the risks of self-harm, substance abuse and alcohol—all of those things. We take a preventative approach so we can take youth off the streets essentially and prevent homelessness.”

Ulrich said it’s such a cool experience of the Home Depot partnership.

“It’s so cool to create a relationship with local businesses in our community and they get to see the impact first hand when they get to come out to the Centre and view the work that’s been done and just how far our agency has come since 2017,” she said.

Ulrich said their programs and services have flourished with The Hope Depot’s help as without the extra funding it would not be possible to do some of the programs.

RYC has been chosen for the Orange Door Project for the last three years.

“I remember back when Janae first approached us back in 2017, took us through a walk-through of the Youth Centre there and all of the work that needed to be done,” recalled  Jason Andrei, Medicine Hat Home Depot store manager.

“And when we left, we were just kind of like, ‘Wow, this is a great opportunity to really give back,’ and give something to these kids so they have more of a comfortable area and a better space for them to go to for all the learning and the stuff that they do there and that kind of thing.  So, that was really kind of why we chose the Redcliff Youth Centre.”

While The Home Depot has not been out doing hands-on work, funds are being raised through the Orange Door project.

The Medicine Hat store goal is $5,000 every time the campaign is held and The Home Depot Canada will match the final total.at

The Home Depot Canada has pledged to raise $50 million by 2022 through the Orange Door Project and since the announcement in early 2021, $38 million has been raised for the charities across Canada.

The Summer Orange Door Project is ongoing until Aug. 1 and donations will be accepted in increments starting at $2 for the RYC.