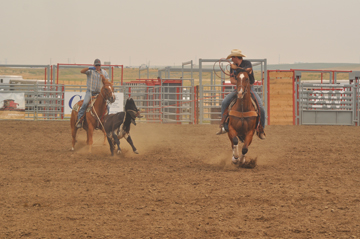 Southeast Prairie Team Roping Association has been around for many years and allows for a fun nights for all ages of ropers at the Dunmore Equestrian Centre.

Roping’s happens on Wednesdays and Sundays.

“It kind of just for everybody to come and rope and have fun,” said Justin Dubeau, SPTRA president.

“It’s a cheap night of roping, the fees aren’t really high. Like open-team ropers—like guys that are going to the rodeos and stuff—they can still enter with their partner and go make some runs and it doesn’t cost a whole lot. The whole family can come out, like they (have) a category for everyone.”

SPRTA has it where ropers pick three and draw three.

“Like last year with COVID and stuff, nobody had (anything) to do. There was nowhere to go—no rodeos or anything. So, like attendance has been up quite a bit. We’ve had (a) lot of members join. I think the secretary told me the other day (in early July) we were at the same amount of members as last year. But yeah, it’s been pretty good.”

The popularity of the SPTRA has stayed consistent in the southeast region.

Dubeau said the SPTRA have ropers that are 12 and 13 years old that can rope and draw a high caliber roper like a number eight, number nine and having quite an experience.

“I remember when I was young and you drew one of the top guys, it’s pretty cool,” he said.

The word spreads about the SPTRA through its Facebook page and posters.

“You’ve got to buy a membership and you get to go to the ropes all summer,” said Dubeau.

There is also the option to buy a day pass.

Ropers have to attend at least three sessions throughout the summer in order to compete for prizes the finals on Aug. 29.

A schedule can found on the SPRTA Facebook page or at http://www.dunmoreequestrian.com.