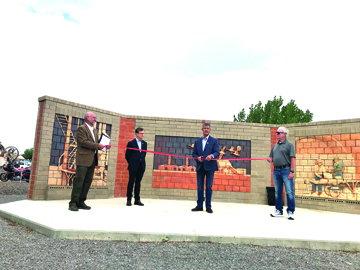 Commemorating all brick plants that operated in the area, the I-XL Redcliff Pressed Brick Park officially opened in Redcliff on Aug. 27. A good-sized crowd showed up to celebrate the event, including Mayor Dwight Kilpatrick and previous Vice President of I-XL, Malcolm Sissons.

After the old factory was demolished in late 2016, Sissons came up with the idea to build a park on the site and construction began in 2017. Initially intended to open in late 2017, vandalism caused some early delays but getting the grass to grow proved more difficult. “We had some terrible, terrible dry conditions and when you are trying to get grass to grow you need some luck with that. Aside from that it was timing, we didn’t want to do the opening during the winter,” commented Sissons.

It was hoped to have the opening last year and the ceremony was all planned but had to be cancelled due to COVID. “I was getting the feeling that people were not sure it was actually open, so we thought we’d better do some sort of ceremony and today I’m really happy to see the event taking place,” said Sissons.

Starting off the event was Piper Major Eric Kean, who played at the top of the knoll while everyone gathered in front of the stage area. Once gathered, Sissons welcomed everyone and gave a history of the brick industry in Redcliff. Ron Mason, music teacher in Redcliff, took the stage next and preformed a song he composed called 97 Years. Next, was the cutting of the ribbon, with Malcolm and Graham Sissons holding either end, Mayor Dwight Kilpatrick taking control of the scissors and Clayton Sissons gave the official dedication.

One of the last bricks made by I-XL was presented to Mayor Kilpatrick, who talked about how enduring bricks are but also expensive and it was a misfortune of the modern world that such items are no longer economically feasible. Before thanking everyone for attending, the Mayor presented Malcolm Sissons with a framed photo of a picture he took of the site.

The I-XL Brick Plant, formerly Redcliff Pressed Brick Company, was a large part of the Redcliff Community. Co-founded in 1912 by the paternal grandfather and great-grandfather of Malcolm Sissons, it was the original plant owned by his family. In 2004, the company decided to consolidate their operations onto a single site and closed the plant. Sissons explained, “Brick sales were declining, and the Alberta Government was getting pretty strict about what they called workplace accidents, with pulled muscles qualifying in that category. It meant we couldn’t keep having guys do manual labour, so we had to come up with a new system, which required lots of automation and we decided to use the plant in Medicine Hat.”

A fenced park with access from Mitchell Street, the park will be both an educational and leisure area with a large mural making a stage area for events to be held. Completed in 2019, James Marshall, who also attended the opening ceremony, “was the artist and I was actually the brick layer for it. Then Al Diller, who was the former Plant Superintendent, was the helper,” said Sissons.

The idea for the mural was not part of the original plan for the park. Sissons explained, “we always thought of a stage area and the idea of a mural evolved and Jim did up his design, which I liked. The knoll in front of the mural covers up the old kilns, which are still intact under the ground. The idea is you could have events on the stage and people can sit on the grass and because of the slight rise there would be a good view.”

Already transferred to the Town of Redcliff, the park was built to be as low maintenance as possible. At the time of the opening, the only missing feature were garbage cans. Sissons was aware of this oversight and said it should be rectified soon.