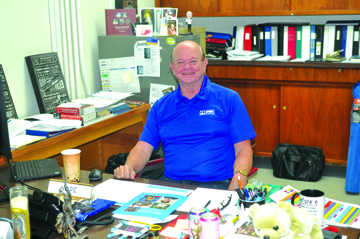 Commentator/Courier Photo by Justin Seward St. Michael's School principal Chris Sumner is feeling the excitement from both staff and students in what is hopefully a near normal year.

St. Michael’s School students and staff returned to the classroom Sept. 1 for a new school year. “The atmosphere I would argue is entirely different than it was with the restrictions and the lockdowns and everything else,” said Chris Sumner, school principal.

“I see a vibrant community that includes not only the students, but the teachers as well. There is  an anticipation of things that have been regrettably  taken away—but we understand why they were taken away. We’re talking about athletics and inter-school athletics, drama and welcome back barbecues. I think there is a real excitement about that with the cautionary phrase, ‘You know this for now and hope it’ll continue this way.’”

Sumner thinks the school has seen an “upbeat atmosphere” because of the return of activities.

Sumner said parents are open to concerns of the hesitancies of kids coming back into the classroom and lets him know.

“But up to this point, I honestly don’t have any that I know of , concerns about coming back to school,” he said.

“Now, again that may change over the next day or two. Again, I teach a lot, so I’ve already had three or four classes and the students seem pretty relaxed—they seem pretty relaxed in the hallways.  We had our first assembly this morning and again I could be wrong, but I didn’t respectfully perceive anyone to be scared or weary.”

The school had its first staff meeting on Aug. 27 and Sumner reiterated to staff that he understands that there are people that are fearful, but  frankly adaptation and flexibility are key because that is what the learning institution is faced with moving forward.

“If you’re fearful—it’s going to be a tough go because we are almost back to normal,” he said.

Schools have had to adapt to learning in and outside of the classroom during the COVID-19 pandemic and there are many aspects of  that learning experience that can be built upon moving forward.

“I call Zoom, T.V. So, when you’re on T.V., it’s just so different and respectfully our students were pretty good because I teach English Grade 7 through 12 and our students were relatively engaged and tried to be engaged—but it’s much more difficult. So, coming back, as I say there’s just a whole new appreciation for being with friends and being in community.”

Having said that, Sumner thinks there has also been a new appreciation for what things have been learned during the pandemic in areas such as laptop handling, virtual learning and being aware of other things that can be accomplished technologically.

St. Michael’s looks to build more on the Franklin Covey and Edwin Parr programming as well as seeing through the new options programming for Grades 7, 8 and 9.