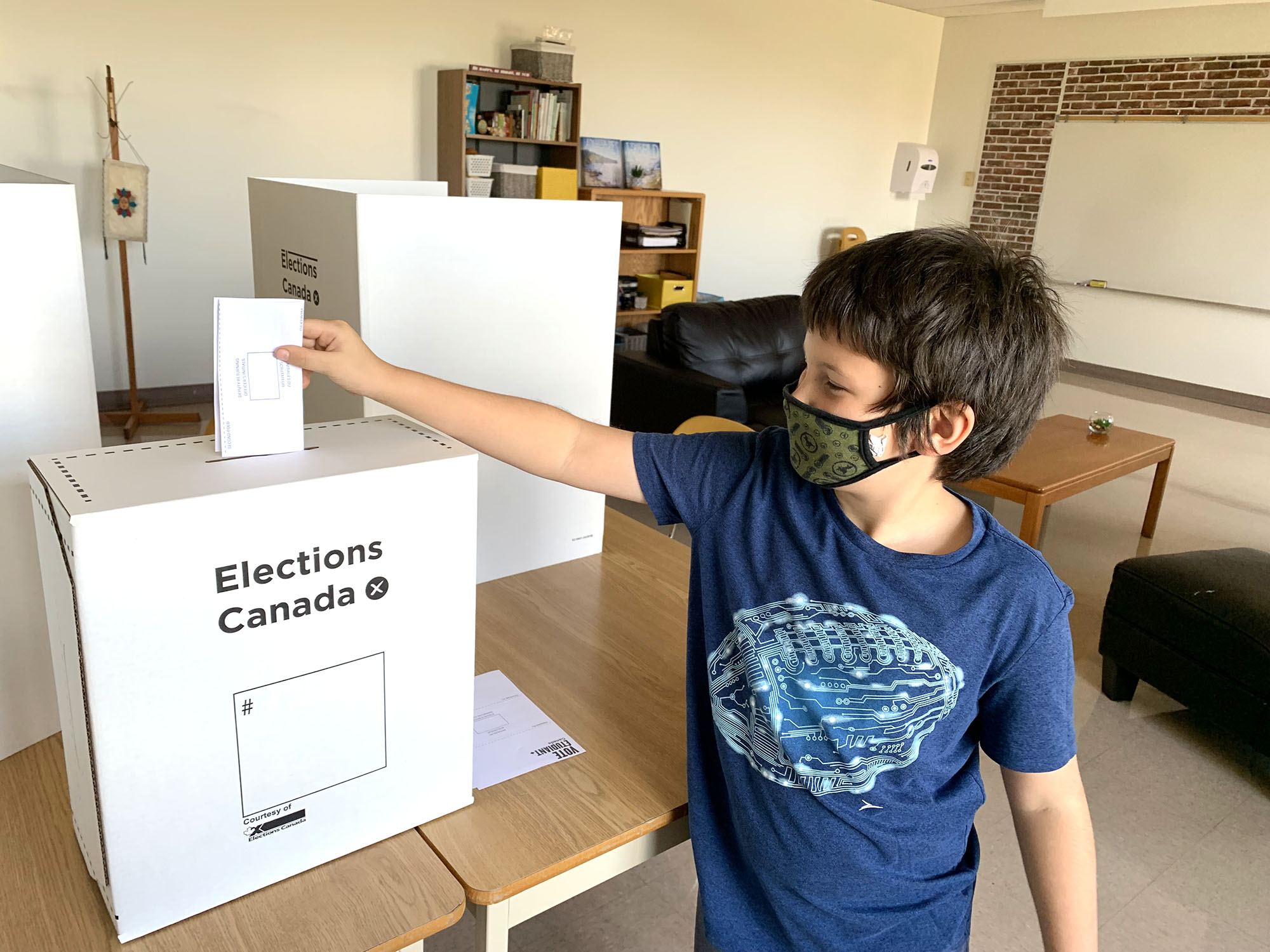 Ralston School (Above) Jaden Heibert drops his ballot in the box.

Irvine School has participated in the Canada-wide Student Vote initiative for almost a decade and students experienced the voting process again on Sept. 20, ahead of the 44th General Election.

Student Vote allows  students to experience the empowerment of the voting process firsthand and cast ballots for the official candidates running in the election.

“Student Votes provide the students of Irvine with an opportunity to experience the democratic process first hand and I think practice the habits of informed and engaged citizenship that go along with that ,” said Stuart Shigehiro, the school’s Student Vote coordinator.

“…It matches real life events with school life and it motivates the students in becoming informed and active citizens.”

Grade 9 students who volunteered were greeted first thing in the morning with Tim Hortons hot chocolate from Shigehiro to declare the day official for the voting experience.

Those students were each assigned a role anywhere from deputy returning officer to a poll clerk and a scrutineer.

“They all had a role in this election just like real life,” he said.

Students who were registered were given a ballot with all the candidates running and were asked to take the ballot behind the security blind to put an X beside a candidate’s name. The deputy returning officer then took the ballots to tear the seam and initial them before voters inserted them in a box.

Candidates only had 35 days to campaign before the election and with that provided a challenge for students to get to know each of the party’s platforms.

“Students—basically they answer questions— and at the end it charts where their responses would align with other political parties,” he said.

Students learned more about the Green Party, the newer Maverick Party and the People’s Party.

“It was an eye opener for them to read their platforms and see what they’re all about,” he said.

Shigehiro said the day went every smooth and the students knew their roles.

In the Medicine Hat-Cardston-Warner riding at Irvine School, incumbent MP Glen Motz won with 105 votes (68.8 per cent), the People’s Party of Canada’s Brodie Heidinger came in second with 17 votes (11.04 per cent,  Maverick Party’s Geoff Shoesmith received 11 votes (7. 14 per cent), Diandra Bruised Head of the Green Party received eight votes (5.19 per cent), the NDP’s Jocelyn Stenger gained seven votes (4.55 per cent) and the Hannah Wilson of the Liberal Party had six votes (3.9 per cent).

Ralston School final results had the Green Party of Canada on top with 30.36 per cent of the votes.

“Now the votes, believe it or not, we selected the Green Party,” said Wade Carrier, Ralston School Student Vote coordinator.

“I think if you look at students, the way we approach this, we were having them take what they believed was important, find a candidate that shared similar values and then that’s what they voted for. Most of these (students) strongly believe in the environment. For the younger kids, you’ve got to look at it when you’re saying they understand the importance of serving the environment and you’ve got to look at our student base here—we are largely British children from the Armed Forces. So, they don’t have (it) as tied to the oil and gas industry as some of the other kids in this district would. So, some of their beliefs would be coming from things back in England or the Commonwealth.”

Carrier’s focus was to make the connection between the Canadian and British political systems.

“I focused on the platforms of the parties—these are their beliefs—now what do you believe in?,” he said.

“For probably most of my kids, there was no pre-exposed history of for example what their parents voted, things like that, in this election.”

Four issues were broken down for the older students including the economy, energy, affordable housing and the environment.

“I thought it was an excellent day overall,” he said.

“We had some kids come in the next day—some of the older kids—they stayed up until 1:30 a.m. hearing the results.”