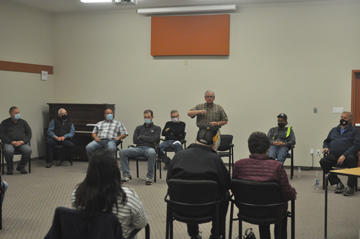 Commentator/courier PHOTO by Justin Seward From left, Stewart Payne, Larry Robinson, Tyson Ormann, Josh Kultgen, Bruce Hillis, Paul Leighton, Blake Klatt and Lorne Buis were all the Foremost candidates in attendance for the forum on Oct. 7 at the Community Hall.

The Foremost and District Chamber of Commerce hosted a forum for the municipal election  candidates at the village’s Community Hall on Oct. 7.

The returning candidates of Lorne Buis, Tyson Ormann, Blake Klatt, Stewart Payne and Larry Robinson were joined by new candidates Bruce Hillis, Paul Leighton and Josh Kultgen to discuss their platform and answer questions about the community in front of local residents.

“But four years ago, we decided that we’re going to stay in this community—so I stepped up and put my name in as a candidate for council four years ago and I appreciate the community voting me in at that time,” said Payne.

“So obviously I’m still living here, still want to serve my community and still want to do the job that you voted me into do last time.”

Payne has worked in municipal government for over 20 years and has the experience of administration and how governments work.

“I realize the constraints of finances and the limited tax base that the Village of Foremost has,” he said.

“I understand the limitations on grants and the available funding the province provides to small communities and the need our small community has for grants.”

Payne said the community knows how to gather together themselves to fundraise, to be volunteers and support the community.

“It’s been a real pleasure being a part of that, so I just thank you, and hope you vote me in again,” he said.

The first question of the night was about how candidates would include residents in their decision-making process.

“In my tenure on council, I think some of the seniors in the room can understand that I stop into the Seniors Centre when they’re having coffee and you know to listen what they’re concerns are and what they’re issues are,” said Buis.

“And same with the hockey arena—go out there and see what the kids are doing, watch the kids  skate and talk to the parents. In this community, I think we are very involved, not just as councillors but as residents. This is a great volunteer community, (if) somebody has an issue, people show up to help and that’s the great thing about this town.”

Ormann had realized that COVID had put a wrench into things the last couple of years and it was said at the last election that the village would hold some town hall meetings—which went by the wayside with the pandemic.

“The Council Chambers are also open, you guys,” said Ormann.

“The public is welcome to  council. But again, COVID, that  kind of went by the wayside and honestly the four years I’ve been on council, we’ve had three people come to council meetings in the four years from the community that had concerns. You guys are always welcome as the public to come. Like I said, we do our best to listen to you and you always express your concerns at council if you wish.”

Candidates were asked how they would address a concern a resident may have.

“What you try to do is take the complaint and then you go and check on the people who are involved with the complaint,” said Leighton.

“So, I guess in a council, if somebody is complaining about water running down my street in front of my house, then I guess you would go to the council and administration and say, ‘Hey we’ve  got this issue. Could we get somebody who knows something about that to check it out?’”

Ormann said council does bring the complaints up and do go through them at meetings and can’t complete them all.

“We know there’s issues with water. But like Lorne said, we’re trying to be fiscally responsible, we’re trying not to blow the bulk water budgetif we have to—we don’t have a huge budget. Again, going into council, those are things that I had to learn that can’t fix every little thing in town. Somethings you’ve got to weigh out.”

The returning candidates were asked about the existing street sweeper and snow removal program.

“The village does focus on the main streets first, like school bus routes and stuff like that and then they work their way out, “ said Ormann, on snow clearing.

“Unfortunately, if you are on a street that is not widely used or on the edge of town, you are the last person to get your snow removed because they start at the schools and do priority streets first. That is improving (and) the last snow fall, I thought was better with the two new tractors and the tandem truck. It is something we constantly work on.”

Buis said, “Like they all said, that street sweeper was beyond repair, we couldn’t get parts for it any longer in some cases. And like Tyson said, it caught fire at least twice. It was time for it to be sent to the scrap yard and we actually got some money (when) we sent it to Ritchie Brothers.”

He did agree that this unit now is not the answer as he believes that it sweeps the street but not well.

The new candidates were asked if they would address the need of a street sweeper.

“I don’t know why we don’t have the old one. All I know is what we have now is an example of the worst smokiest day in August­— that was the day they decided to go up my street with this dusty thing and honest to god, all itreally did was blow dust all over people’s windows and rocks were still on the street and later that day, somebody whipped down my street and threw a rock into my windshield from moving rocks around.”

Leighton would address it and have something with water and something to pick up the rocks.

Albertans will go to the polls for the municipal election on Oct. 18.