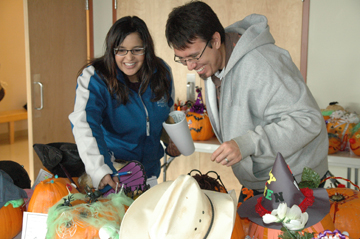 SOuthern Alberta Newspapers FILE PHOTOs Due to Covid-19 regulations and concerns, the pumpkin festival has changed to an online event from the biggest pumpkin contest as well as best decorated pumpkin as part of the Pumpkin Festival.

For a second year in a row, the Foremost Municipal Library’s Annual Pumpkin Festival Auction is fully online due to COVID-19 protocols.

While the large annual and only community fundraiser was originally planned to have a live component this year, this in person component had to be cancelled following the beginning of the fourth wave and the updated restrictions.

Despite this, the Foremost Library is optimistic about the success of the event, said Stewart Payne, Board Chair at the Foremost Municipal Library, partially because they were planning to do part of the event online regardless.

“The announcements got ahead of us. We were advertising for the event already and then the restrictions came into place and we’re like, our announcement already went out that we would have a live event so that had to be you know, we have to advertise a little bit more saying, Oh, no, now it’s just strictly online,” said Payne. “So advertising got into us a little this year. But we were prepared. We already had the online access and the online procedures ready and everything. The deadline for donations is still coming. So we still have donations coming in. And then once the donations are in, we then organize them and get them online. And, you know, set all the functions and features of the online process. And then we’ll go live with the online auction. So yeah, we’re prepared. We were planning on doing a portion of it online anyway. So now we’ve assessed that we just have to do it all online instead of a portion of it.”

The previous year was also fully online, and the donations were roughly the same as they had been for an in person event, said Payne. Though it was impossible to track how many people viewed the items and decided not to bid, the amount raised was very close.

The auction will officially begin on October 20th and run until the 27th, the Wednesday before Halloween as opposed to the usual date of the live auction, which is historically the Friday before Halloween every year. However, interested individuals will be able to view the items starting on the 16th.

“The Foremost library does have a website through the Shortgrass Library system,” said Payne. All the information for the auction is on there. So we hope everybody will log in and look at the items and bid. And when people go online and look at our website, our website also has an area where they can donate directly to the library. So if and that’s open anytime throughout the year so if anybody has interest in supporting the library they don’t have to wait for the auction they can do that anytime.”