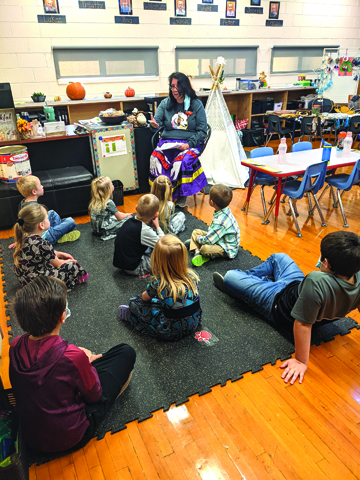 Whitebear Creations was established by the Francouers in 2019 and allows people to see art come to life.

The indigenous artists specialize in art such as dreamcatchers, drums, and other specialized items, which are custom made for each individual.

“Some of my art is pertaining to the indigenous culture that was taught to Trish and me,” said Brenda.

“We were taught by our elders. I was taught by a lady—her name was Evelyn Jebb—and she was an elder on my reserve. I was in a single parents program at the time and I was looking around  like, ‘What do we have here?’ and I (had) seen these beautiful dream catchers. So, after I said, ‘Who makes these beautiful dreamcatchers?’ and she goes ‘I do.’ I said ‘OK’, she said, ‘Would you like to learn?’ and I said ‘sure.’ So, the next day she went through the history of the dream catcher and what the dream catcher was meant to be.”

Brenda then had taken the same kind of concept and has applied it to what she teaches in the schools with the storylines,  talks about the dream catcher legend and the Seven Grandfather Teachings.

The Seven Grandfather Teachings are traditional concepts of respect and sharing and  formed  the foundation of the Aboriginal way life and are built around seven natural laws or sacred teachings.

Each teaching is represented by an animal to underscore the point that all actions and decisions made by man are manifested on a physical plain.

The Eagle represents love being unconditional because of its unique relationship with its creator.

Respect is represented through a buffalo because as long as indigenous people have been around, the animal has been utilized for sustainable lives through clothing, food, shelter and expressing ourselves through art.

Turtles represent truth because they are one of the oldest animals on the planet and have characteristics of methodical, being careful and attentive to detail—which are important characteristics when speaking the truth.

Beavers represent wisdom because they utilize their gifts in ways to promote wellness to itself and their families.

The bear signifies courage because of its strength and natural ability to overcome challenges.

Honesty is represented through the Sabé because of its closeness to the creators as it was said it used to walk through humans to remind us to stay true to our natural forms.

The wolf brings out the humility because the giving nature and devotion to protecting and working for their family.

“In our indigenous cultures, animals pertain to those kind of virtues,” said Brenda.

Brenda said she does stories all the time throughout her first interaction with her workshop.

“The drum is also another story. I pertain to them about how the drum is important—the drum represents the heartbeat of mother earth. Back in the day, the indigenous people always used the drum, and not only for ceremonies, but for sweat lodges and stuff like that.”

The students only know the drum as a percussion instrument and she gives them more of an understanding, as well as with important medicines such as sweetgrass, sage, tobacco and cedar—which is burned together through ceremonial purposes with smudging.

The trio interact with the students.

“The funny thing about it is that when we walk into each classroom, we don’t know each other and by the end of the class, they’re all giving us hugs,” said Brenda.

“That’s profound to me because being able to reach a young child like that in this kind of culture, it’s amazing. I’m very overwhelmed that they took me and they made me come and teach them and they walk away with acceptance.”

Her teachings also pertain to bullying and she often refers to the lone wolf and why he is by himself.

“Because he was bad and he got shunned by the pack,” she said.

“I always tell them; you guys are the pack. You guys have got to take care of each other, don’t let other people bully you. If you see something going, let somebody know.”

Discrimination and bartering are also taught.

History of the indigenous culture commences in the morning before dream catchers are made in the afternoon.

Whitebear Creations has visited  Burdett and Prairie Mennonite School back in March.

The Francouers moved to Medicine Hat from The Pas, Man. in 2014.

Whitebear is English for Wapasewikmaw (Cree for Whitebear).