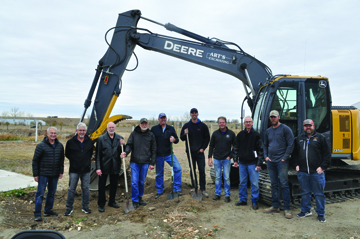 The Prairie Gleaners made an exciting move Monday afternoon, breaking ground for a new building that will add about 4,000 square feet of operational space to its current location south of the city.

The local Christian-based volunteer organization gathers donations of surplus produce from growers in the area and dehydrates them to make a vegetable soup mix that is then packaged and shipped all over the world.

The Prairie Gleaners’ September newsletter says 2021 has been a productive year.

“So far we have shipped 16,372 bags of our dehydrated vegetable mix to a variety of countries around the world such as Venezuela, Nicaragua, the Dominican Republic, Guatemala, the Ukraine, as well as our own Mustard Seed locally,” says the newsletter. “At 120 cups per bag, this equals 1,964,640 cups.”

Prairie Gleaners president Edward Codding addressed the crowd at Monday’s groundbreaking ceremony and spoke about the beginnings of the organization.

He quoted Isaiah 58:10, which says, “If you give food to the hungry and satisfy those who are in need, then the darkness around you will turn to the brightness of noon.”

“That’s the scriptural basis for our beginning and our mandate was to gather surplus and off grade vegetables from growers in the area and use that to help feed the world’s hungry,” Codding explained.

In comments to the News following the ceremony, Codding explained that the expansion has been a hope for a while. The group knew it could get more food, could convince more volunteers to come work with them, but the stopping point was the dehydrators. Codding said both dehydrators are filled each day and left to dry overnight.

“No matter how you looked at it, our choke point was being able to dehydrate the food. We needed space to put the dehydrators, but then everything else I talked about falls into place … you just need a lot more space to do all of that,” Codding explained. “Coolers to store the food, space for the volunteers to work, spaces to bag the product and store it. A 4,000 square-foot building will solve a lot of those problems.”

The new building will increase working space by about 70%.

Codding said the board of the Prairie Gleaners Society envisioned this expansion, but knew they couldn’t complete it on their own. That’s when Rick Wagner from Big Marble Farms stepped in to help them organize and make connections that could help with the project.

“He knew all of these guys and they all said, ‘Yeah we’ll do that’, and that kind of participation by a community is just fantastic,” said Codding. “I don’t know how to describe it, it’s just wonderful.”

Several local businesses and contractors are contributing to the project. Many of these contributors were in attendance Monday, including Brett Schneider from Art’s Excavating who took the first dig at the dirt.

Jim Grossman, treasurer for the Prairie Gleaner Society, has been amazed at the collaboration making the project possible.

“It’s just so many like-minded people who have worked together to make it happen.”

Prairie Gleaners hopes the new building will be fully operational by this time next year.