Last ditch effort to save ski season at Hidden Valley 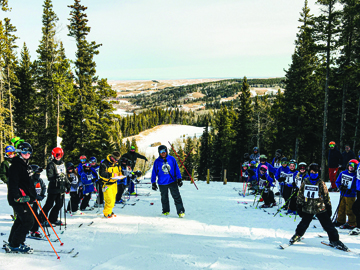 Skiers gather at the top of one of the runs at Hidden Valley Ski Resort in this undated handout photo from a group responsible for a last ditch drive to save the upcoming season. It was announced last week the hill will open Jan. 6.

While awaiting confirmation from Alberta Parks about whether Hidden Valley Ski Hill will remain closed for upcoming season, Elkwater Ski Club is attempting to get the attention of the province’s Minister of Environment and Parks, Jason Nixon.

The Elkwater Ski Club board recently addressed a letter to Nixon, explaining the social and economic impact of a potential closure. Members of the club have also started a social media campaign which aims to show the importance of the site to local residents.

In the letter addressed to Nixon, the Elkwater Ski Club board wrote, “Hidden Valley is an important recreational facility for residents of southeast Alberta and beyond. The ski resort provides opportunities for children and families to ski when travelling to the mountains is not an option. (It) also plays an educational role … providing an opportunity for learners to try a new activity as part of their schooling, at an affordable cost.”

“Hidden Valley is also a massive economic driver for Medicine Hat and surrounding communities,” the letter reads. “It plays a role in making southeastern Alberta a desirable location for residents and tourists to work, play and live. Local businesses have been built around demand related to the ski hill’s ongoing operations … (if the hill is not in operation) this season, local businesses will be unfairly disadvantaged as people take their money and go skiing elsewhere.”

The letter ends by urging Nixon to keep Hidden Valley open this year.

The accompanying social media campaign, which uses the hashtag #littlehillontheprairie, invites members of the public to contribute to the campaign by posting pictures taken at Hidden Valley on Facebook and Instagram. Any posts should include the tag @alberta_parks.

George Best, a resident of Medicine Hat and season’s ticket holder at Hidden Valley, took part in the campaign by posting photos of his family’s adventures at the hill.

“We are always at the ski hill,” Best told Southern Alberta Newspapers. “It’s just what we do. We’d jump straight into the car and head out there. Snowboards and all our gear are ready to go always. Even now.”

For Best’s family, Hidden Valley has the most easily accessible skiing and snowboarding slopes. If Hidden Valley doesn’t open this year, his family would most likely lose their winter pastime as other hills are too far to travel with their children within a day.

“There’s nowhere else really,” said Best. “(Castle Mountain Resort) is the next closest … unless you’re going to Kananaskis or Banff, but even then, that’s a real trek.”

Best is hoping those deciding whether Hidden Valley will open again this year will see posts from ski hill goers.

Hidden Valley has been a destination in southeast Alberta for more than 50 years. It is currently unknown who would operate the site if opened this season. Alberta Parks, which has operated the hill since 2015, was looking for a private contractor earlier this year. There were several interested parties but it is not known whether any bids where made.

A spokesperson for Alberta Parks told the News on Oct. 28, “Alberta Parks is currently reviewing its options for the upcoming season and determining its next steps.”

Elkwater Ski Club members hope their letter and campaign will have an impact on the impending decision.

“Before you make your decision, please take a glimpse into the life of our ski hill,” a representative from the Ski Club wrote to Nixon.

Southern Alberta Newspapers has reached out to both Nixon and Alberta Parks for comment, but has yet to receive a response.