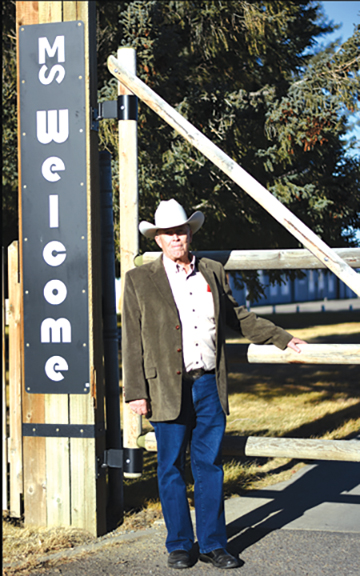 Medicine Hat Exhibition & Stampede has always been part of new general manager, Ron Edwards', life. He is excited to combine his passion with his profession. Southern Alberta Newspaper by KENDALL KING

Ron Edwards has taken over the general manager position for Medicine Hat Exhibition & Stampede as of Nov. 12, replacing Kara Brake.

Edwards told Southern Alberta Newspapers his appointment to the position was unexpected as he was approached by the Stampede executive board only one day before starting. Despite this, Edwards is expected to hold the position for the foreseeable future.

“It was a privilege to be asked and an honour,” Edwards told Southern Alberta Newspapers “I will do my best to get it to where somebody within the organization can take over.”

Edwards first started working at the Stampede when he was 16 as a member of the horse show committee.

“I grew up here and I’m pretty proud of this organization and what it stands for,” Edwards said. “Throughout my time being a member of the Medicine Hat Exhibition & Stampede, I’ve chaired many committees from rodeo, to horse show, to free entertainment, to major projects.”

Edwards had a chair at the executive board table for 10 years and served as president of the Stampede from 1999 to 2001, as well as being president of the Rocky Mountain Association of Fairs, a cross-border fair and entertainment organization which oversees nearly 100 fairs.

“I have very good knowledge of the organization and how it works … and the different committees that make it happen,” Edwards said. “I certainly have the passion for it.”

Edwards provided little information about Brake’s departure from the organization but wishes her well in her future endeavours. As he becomes more comfortable in his new role, he instead wishes to focus on the future.

“I believe we’re one of the pillars of this community,” said Edwards. “(Some people) think the Stampede is a summer fair but we’re a year-round operation. We bring a huge economic impact to the community through all our events.

“Coming off two years where we didn’t have a lot of events, moving forward our committees are absolutely looking forward to a full year. Our spring rodeo, which we haven’t had for two years, is now scheduled for April. We’re working on the chuckwagon contract for 2022, for the next three years. And our summer fair, rodeo, night show and midway; the committees are all working on making those a go … Our future is to bring in new events and continue as we were doing before COVID hit,” he said.