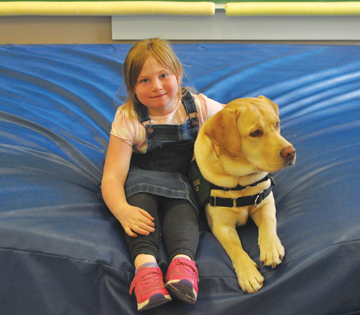 The COVID-19 pandemic has taken a toll on the world.

But one bright spot to come of this world health crisis locally is in the form of  a service dog coming to Prairie Rose Public Schools to help bring life back into students and staff during these difficult times.

The service dog concept got approval in February 2020 and behaviour consultant Di Robson now has nine-month-old Labrador Retriever Jude—who is the third dog to be a part of the school division since the programs  inception.

All the dogs came from Cowboy Up Kennels in Irvine.

“I wanted to be able to bring him to the school,” said Robson.

“I saw the role and did some of the research and thought it would benefit the puppies as well because they get a lot of socialization and put into different positions and are able to experience lots of different things that they typically wouldn’t if you’re not in a school setting.”

Robson approached her supervisor and she went to then PRPS superintendent Roger Clarke, who had few questions, and it was agreed upon the service dog would be tried.

“The school has just been really supportive in letting me try this,” said Robson.

“And because my role goes throughout the school division, he gets to come with me. He gets to ride in the car, he gets to go to this campus, he gets to go to that school and things like that. So, there’s no program per say, but it’s been an opportunity that Prairie Rose has been really supportive of and our new superintendent Reagan (Weeks) is a big fan of the service dog program.”

Robson’s goal is to bring Jude into the school experience because something can happen.

“There’s (a) lot of times where he’s distracted by the kids or stuff on the floor or the kitchen is right outside my office, there’s bells going off (and) there’s assemblies. He goes outside on the playground and he has to learn to focus in on me no matter what’s going on because as a service dog— I can’t have him pulling … So, a lot of that is getting his basic skills up and ready to go to that next level of training.”

The focus for the students is to expand on their knowledge and what the dog can help them with.

What is gratifying for Robson in the school is seeing kids that weren’t necessarily eager to come in the school and dog friendly and are able to watch that growth over time and the excitement to see Jude is noticeable.

“I’m walking down and the teachers are like, ‘Can I pet him?’” she said.

“You can see the dog is vibrating as much as the people. Everybody I think is respecting how much work it is and what the benefit is. So, I think that’s why we’re still welcome to come. He’s a puppy, he’s still making mistakes and he’s picking stuff up he’s not supposed to. But the idea  that he gets better and watching him change and grow is also good for the kids too.”

Robson has fielded calls from other interested school divisions to take a look at the opportunity.

“Lots of smiles when they’re here and I think that’s what our staff and our kids need during this time,” said Linda Asham, I.F. Cox School principal.

“But what we’ve seen is (a) lot of our kids that struggle have been able to come out of their shell and they feel important with a service dog. They feel that they’re able to work and get along and manage, walk and train the dog. We’ve had ones that take the dog on swings and down the slides and I think it gives them a sense of accomplishment.”

Jude will be at schools until May before being moved on to the next step of training in Edmonton at Aspen Service Dogs before being placed.

The local trainer breeds Jude and weekly training is at places such as the library and the provincial building.