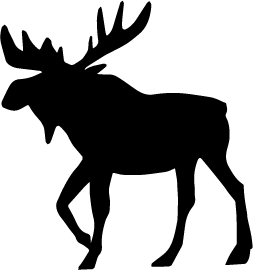 In 2017, Chlöe Chapdelaine was working at the Foremost pool and 40 Mile Regional FCSS, staying at her family’s trailer at 40-Mile Park, when she came up with an idea that will be etched in Canadian history.

The Hatter would see a moose crossing sign coming out of the park and thought the sign did not look like how she would imagine it if she were to design the logo.

“It looked a little bit sloppy and I know that to me, it didn’t even really fully look like a moose,” said Chapdelaine.

“So, I brought it up to my coworkers at the pool and FCSS and I said, ‘Hey have you guys noticed this moose crossing sign before?’ And all of them are like, ‘Oh my gosh, yes we’ve all seen it and we agree with you, it doesn’t really look like a moose.’”

She was a Medicine Hat College student at the time and enrolled in the visual communications class with the intentions of being a graphic designer.

“So, I said, ‘You know what I’m going to try and redesign the moose crossing sign just for fun,’—like as a fun project  to keep me entertained. So, one day after work I sat down in my trailer with a Sharpie and I drew out a moose—how I would imagine a moose crossing sign to look— and I typed up an essay that I ended up mailing.”

Chapdelaine described the essay as “fun and light hearted” where she had mentioned the moose looked like a sad floppy looking animal and many other things that were not too serious and just poking fun at the sign.

“I went to the post office in Foremost and I mailed like maybe 10 of these letters out to different departments of transportations and the government—not really knowing if I was sending it to the right people or not,” she said.

Chapdelaine did not hear anything back until March 2021.

“But they (Transport Canada) said that they were interested in moving forward with my new moose design, which was so exciting,  I did not expect to hear back ever, since it took so long, ” she said.

“But, yeah, it was super exciting for me and yeah I gave them the design and now it is the new standard for moose crossing signs across Canada.”

What got the attention of the news recenty was when she posted a Tik Tok video a few months ago talking about the story and overnight the video received millions of views and thousands of comments.

“It was really cool to see such a positive response from Canadians— like across Canada responding to this story when I was just 18 years old—like working this summer job—and did something out of boredom,” she said.