Delta Irrigation recognized by Reinke as a top ten dealership in the U.S. and Canada 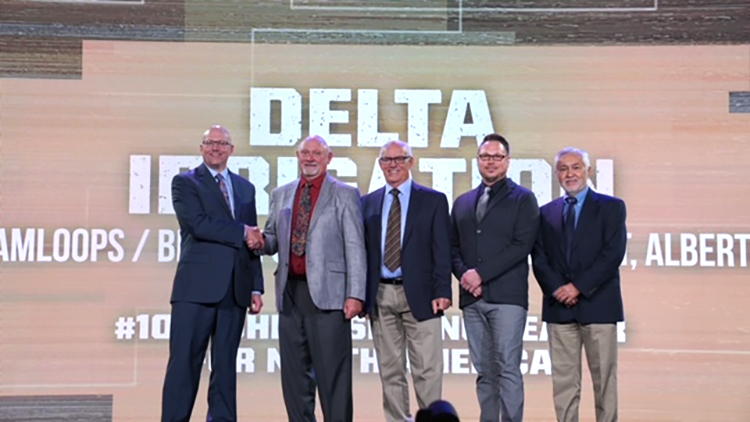 Reinke Manufacturing, a global leader in irrigation systems and technology, has recognized Delta Irrigation as a top ten dealership for total sales in the U.S. and Canada.

Other honors for Delta Irrigation included being named a top five parts dealer, top five dealer in the northwest territory and Diamond Pride awards for both locations in recognition of their success last year.

“We are proud to honor the team at Delta Irrigation with these awards,” said Chris Roth, Reinke president. “They’ve dedicated themselves to supporting the growers in their area. We appreciate those efforts as Reinke continues to develop and implement irrigation equipment and technology designed to increase agriculture production.”

Reinke dealerships from across the United States and Canada come together annually for the company’s sales convention to recognize select Reinke dealers for their hard work and commitment to serve growers. The Reinke Pride awards are determined as part of an incentive program that distinguishes superior achievement levels according to an evaluation based on a dealership’s exterior and interior housekeeping and maintenance, indoor and outdoor displays, safety, retail environment, merchandising, professionalism, promotions, event participation and market share.

With hundreds of dealers in more than 40 countries, Reinke Manufacturing is the world’s largest privately held manufacturer of center pivot and lateral move irrigation systems. Family owned since 1954 and headquartered in Deshler, Neb., Reinke develops products and technology designed to increase agriculture production while providing labor savings and environmental efficiencies. Reinke is a continued leader in industry advancements as the first to incorporate GPS, satellite-based communications, and touchscreen panel capabilities into mechanized irrigation system management. For more information on Reinke or to locate a dealership, visit Reinke.com.