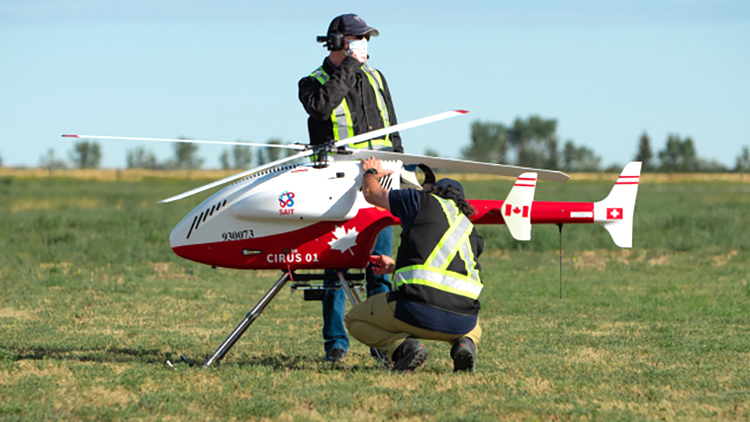 Outside of Foremost, the cold weather doesn’t stop new innovations from taking flight.

The idea was first born in 2008, but it took until 2016 for Transport Canada to approve the Foremost UAS Test Range as just that, a space for remotely piloted aircraft systems, said Steve Donovan, Operations Manager and Range Safety Officer.

To accomplish this, the range sends out a Notice to Airmen, which reaches all local stakeholders as well as the flying community surrounding Medicine Hat, including crop dusters and local pilots that would be flying out of the airport. This allows for the testing of client aircraft systems without concern of manned craft interfering.

While clients do need documentation for approval to use the test space, Donovan and his team review the necessary procedures and help these people get it submitted to Transport Canada for approval.

Currently, the test range is operational from August 1st to May 31st each year, with a break in the summer when crop dusting is most prevalent in the area, though Donovan notes that this may be subject to change in the future.

“We find in real time with myself as the RSO on site, we have communication up to 48 hours whenever we have any flights going on here. Priority One is always those flight essential missions manned aircraft being crop dusters or HALO,” said Donovan. “If they have an emergency in this region, they get priority one, we put our drone operations on standby. Let them do their duty. And then after that, we have the drones continue on.”

There are over 500 drone companies in Alberta alone, said Donovan, and may of them are clients of the test range, including SAIT, but their reach doesn’t stop there, with clients from as far as Ontario.

Recently, the test range has moved into new work, helping clients get permission to fly their drones outside of the controlled airspace.

“That’s the ultimate goal. So that they can, for their service providing company, if you could imagine, instead of seeing something 750 meters in front of you, now you can travel a drone, or UAV, up to 10 kilometers, transmission, power line inspections, agriculture surveys, forestry inspections, pipeline inspections, that puts that service industry, sometimes three up to 10 times fold as far as their productivity where they can accomplish,” said Donovan. “You can think about like a transmission line, high voltage, all of a sudden, you’ve got people that are up in the air on aerial platforms, people that are hanging close to the precarious high power lines. Now you do those inspections with a drone. So human life factors are mitigated, you know, with this type of an operation. The technology on them is so fantastic. How far they’ve gone here now, compared to some little drone that you might have seen. When they say that you’re the pilot, they actually operate themselves in a lot of aspects. You’re just the one controlling the joysticks, or in some cases, just autonomous operation. And you just set up the path or in the waypoints for that particular operation and it flies itself.”