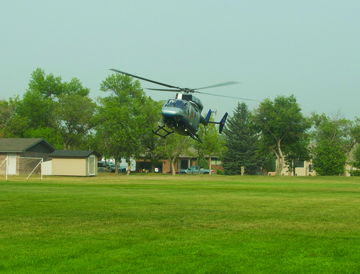 The inaugural lottery of Cattle er’ Cash in 2021 has changed its name to the Cattle er’ Cars fundraiser this year.

“So (we are) back with Highland Angus and the family has been amazing, and big supporters,” said Paul Carolan, HALO chief executive officer.

“We did that this year, back again with them this year, and then we added Medicine Hat Volkswagen.”

The grand prize is 25 bred heifers from Highline Angus or a 2022 Volkswagen Atlas.

“So just a different way of doing it and jusr trying to  stick with that rural and urban side of things, and no matter who wins, there’s something to choose and to make a big difference in your life,” said Carolan.

Carolan was asked about the change.

“Yeah, we want to keep growing the lottery. So I think having a bigger grand prize and more prizes overall was important and so you know trying to be creative. The cash thing was a cool idea and it was great way out of the gate originally.”

50/50 tickets will have different packages available.

Tickets are available at http://www.haloairamblaunce.com.

The lottery draw will be on June 30 at the Halo in the Hangar event.

“This has the ability to become one of the perennial fundraisers for the program,” said Carolan.

The hope is have more tickets and prizes in the future.