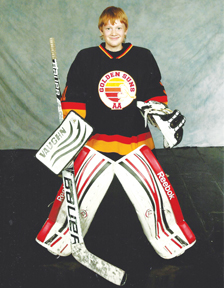 PHOTO SUBMITTED- Brendan Olson of Seven Persons is playing in his first ever Alberta Winter Games. He was chosen over eight other goalies who tried out for the Zone 1 team.

By Tim Kalinowski
When he first started out playing hockey seven years ago in Manitoba, Brendan Olson, now living in Seven Persons, was given a gift by his dad: 1980s era hockey cards.
Brendan grew up hearing about Patrick Roy and Ed “The Eagle” Belfour. He soon began to realize he wanted to be a goalie himself, and four years ago began to make the transition to playing that position full time in minor hockey. Now 12 years-old, (he will be 13 in March), and in his first full year of AA hockey, Brendan has been chosen to represent Zone 1 during the upcoming Winter Games.
“It’s really cool. This is my first year of competitive hockey. I moved from Manitoba to here just this year. I’m not really nervous. I probably will be as it gets closer, but not right now. I like being goalie because you get to stop lots of pucks, and sometimes you can carry your team out of certain situations.” says Brendan.
It wasn’t easy to win one of the two goalie positions on the team.
“When I tried out at the end of November there were nine or ten goalies there, and I only actually tried out for one day,” remembers Brendan. “They told me only a few days after try-outs that I was on the team.”
A confident you man, Brendan feels ready to meet the challenge of the upcoming games.
“I think I am ready for it. I am playing for the Taber AA Golden Suns so I should be ready by the time the Games come. We aren’t actually allowed to practice with our Winter Games team. So we just have little assignments to get to know our teammates better. I think you just got to be confident going in and trust yourself, and not get down when you have a bad game or something,” says Brendan.
Brendan is very excited for the opportunity to represent southeast Alberta Feb. 13-16 in Medicine Hat.
“I think it is going to be kinda cool,” states Brendan. “Already with AA, I kind of figured out it was going to be quite a bit faster pace than minor hockey. It’s a pretty big jump going to play at the Winter Games. I know I got to play my best.”
Brendan says his current day NHL goalie hero is Carey Price of the Montreal Canadiens.
“I just like his style,” confirms Brendan. “When I’m out there I try to smother the puck and not give lots of rebounds.”