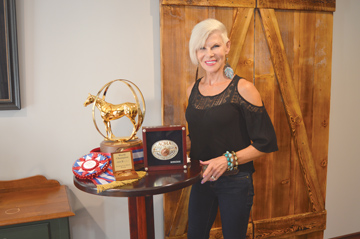 Photo by Tim Kalinowski- Lauren Boychuk shows off her trophy, ribbon, buckle, and other items she won as AQHA Boxing World Champion at her Medicine Hat home last week. Boychuk was also the overall cattle horse points leader in the AQHA last year.

By Tim Kalinowski
Lauren Boychuk, daughter of Redcliff’s favourite son George Hope, recently won big at the American Quarter Horse Association World Championship Show in Amarillo, Texas. Boychuk and her horse “Ima Miss in Texas” beat a field of 47 riders to win the cattle boxing world title for 2016. It’s been a great year on the competition circuit for Boychuk, who was the North American overall points leader in 2015 in all the AQHA cattle horse categories. In July, Boychuk also won the Boxing Spectacular in Flagstaff, Arizona by winning the highest overall point total in cutting, reining and boxing combined.
High performance athletes like Boychuk usually can look back on a lifetime of training to get to this level of success in their sporting careers; not so Boychuk, who has only been competing for the past five years.
“I grew up riding, but when my kids were growing up I didn’t ride very much,” explains Boychuk. “We didn’t have enough time or money for all of us to do it. So I let them do it. I started riding again when my youngest daughter graduated from high school. Five years ago in September, I phoned Jason Grimshaw, he was the trainer for my oldest daughter and was in Louisiana at the time. I phoned him and I was going down to his daughter’s wedding and I said: I want to ride with you.”
Boychuk started travelling to Louisiana on a monthly basis to train with Grimshaw, and made an investment in her first high performance quarter horse, a mare aptly named Porsche. She now has a stable of three supreme mares: Porsche, Ima A Miss in Texas and her most recent acquisition Bucklebunny.
“I just love it,” says Boychuk. “I am very passionate about it. My dad gave me a great passion for horses. You don’t just ride them; you have to love them. You have to work as a team. You have to think about them and how the feel when you go into the ring, and have that good communication. The more they love you, the better they will work for you. I have a great trainer and I have great horses.”
Boychuk explains what boxing is for those readers who might not be familiar with the sport.
“You have 50 seconds, and you do your reining pattern first. And then they let one cow out and you have to hold the cow down at the end of the arena and not let it get past you. Your horse has to stop and rollback. Stop and rollback. Stop and rollback. The faster the cow goes the faster you horse has to go. If you get behind you lose points. If you go too far past you lose points. If the cow gets away— of course you are going to lose points. It’s very precise and technical riding.”
Boychuk might have gotten a late start in her competitive riding career, but she is now happily making up for lost time. She believes what gives her that little extra edge as a rider is her upbringing on her dad’s ranch, and the special way she learned how to ride.
“It’s amazing to me that it has only been five years,” says Boychuk with a big smile. “It was a big jump for me when I started training with Jason; with a big learning curve. One thing I do have is very good balance, because I learned to ride bareback on my dad’s ranch. I only rode bareback until I was fourteen-years old.”
Boychuk has several months of competitions still ahead of her to end 2016. She aims to continue the pattern of success she has had for the past few years. She is gaining a winning reputation in the field, and those in the know have begun calling.
“All the western magazines are calling me for an interview, and I am thinking this is crazy,” she says with a laugh. “I just went in there (at Amarillo) and rode my horse like I always do.”